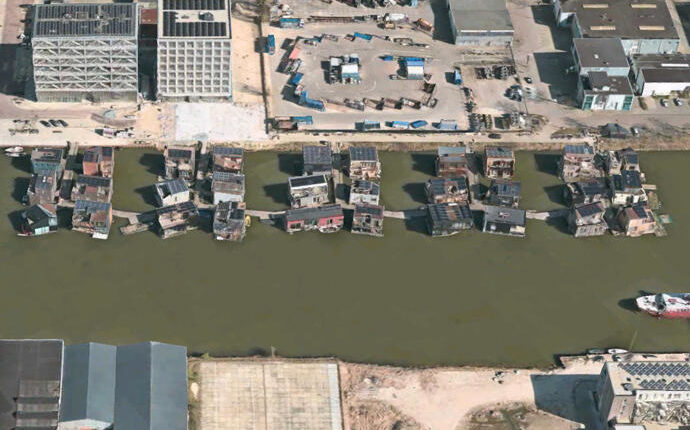 Embracing Life on the Water in Amsterdam There’s a waterworld afloat in Amsterdam.

A group of pioneers worried about climate change and encroaching sea levels have created a buoyant neighborhood, where homes share electricity via a local smart grid and bob with the tied thanks to steel foundation poles that allow them to rise and fall, the Washington Post reports.

In the town of Schoonschip, a neighborhood in the north of Amsterdam, about 150 residents live in 30 industrial-chic-style floating homes in a post-industrial area surrounded by gardens, a community center and a vegetable patch.

Unlike the more than 10,000 barges-turned-houseboats that pepper the canals of the city, Schoonschip’s floaters feature a modern design and are serving as a framework for the more than 600 million people living in harm’s way of climate change, according to the newspaper.

The homes, which are all connected by jetties, are built off-site, then tugged in and secured to the canal bed. Their cozy interiors feature soft lighting and modular furniture that can be taken apart, moved, and put back together to make room for lifestyle changes. And unlike homes sealed to a cement foundation, they are easy to be unmoored and hauled off when an owner decides to move.

“[Y]ou can turn them, flip them, take them with you. The flexibility on water in incomparable with the flexibility on land,” architect Sascha Glasl, a resident of Schoonship whose firm, Space & Matter, designed the community’s jetty system and many of its homes, told the publication. “It’s evident that sea waters will rise, and that many big cities are really close to that water. It’s amazing that not more of this innovation and building on water is being executed.”

The residents of Schoonschip all signed a manifesto promising to build, insulate and finish their homes with eco-friendly materials, routinely eat with one another, share bicycles and cars, and swim together outside their doors, with some kids jumping into the dip from their bedroom windows.

The floating neighborhood is also a reimaging of an industrial area that has been mostly abandoned by manufacturers such as Shell oil and Fokker, which built parts for airlines. And the Ductch government, which has been dealing with tide-based issues for more than a century, seems to be signing on to the idea, considering that building on the water will become a necessity in a country where one-third of the land is below sea level.

It recently amended its home-owner laws, defining floating homes as “immovable homes” instead of “boats,” which has made it easier to get building permits.