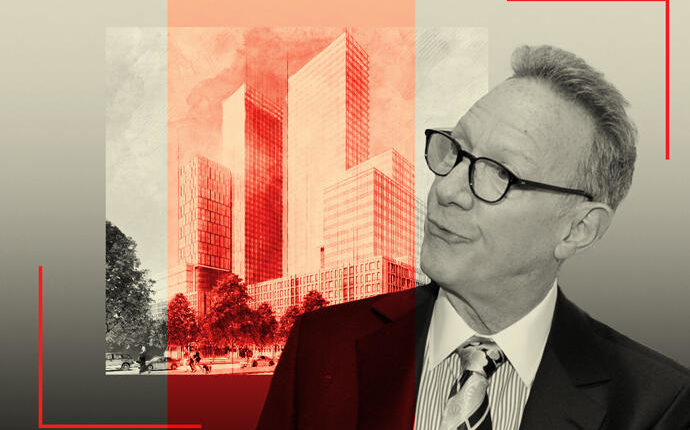 First, Ian Bruce Eichner couldn’t get through public review. Then, a judge slapped him down. Now he’s back in court, pursuing a Crown Heights project that might never happen.

For four years, Eichner’s Continuum Company and Lincoln Equities Group have been trying to build a large residential development near the Brooklyn Botanic Garden. Even the ground beneath the project is slipping away, as the spice merchant who agreed to sell them the site wants out of the deal.

The developers sued to save the agreement, but a judge dismissed the case last week. Yet they are suing again, hoping to complete the sale and haul in their white whale.

In 2017, Eichner’s partnership reached an agreement with Zev Golombeck to buy two plots at 960 Franklin Avenue, the site of Golombeck’s former spice factory. The envisioned development depended on a rezoning, so the closing was put on hold. If everything went according to plan, Continuum and Lincoln would pay $42 million for the property.

Continuum planned to develop two 34-story residential towers on the site. Half the units at the towers would be affordable, and the entire project would be built and run with union labor.

Despite those selling points, the project drew immediate opposition. The Botanic Garden said the towers’ shadows would kill its rare plants, and locals warned of overdevelopment and gentrification. Continuum’s troubles compounded in March 2020, when the pandemic froze rezoning reviews, stalling the project for six months. Then the mayor came out against the plan midway through the review, a rarity in city politics.

Even without a rezoning, though, Eichner could still build a profitable project. He just needed Golembeck’s land, which was adjacent to a parcel Continuum already controlled.

Like the development itself, the agreement between Continuum and Golombeck changed form several times as the delays and opposition persisted. In February 2020, just weeks before the pandemic’s first wave shook New York, Continuum and Golombeck pushed the closing back to Dec. 31, 2020. In return, the developers would put $100,000 in escrow every month until then. The monthly payments would count toward the purchase price.

The developers missed the March payment, and Golombeck’s attorney declared the sale agreement in default. However, he never canceled it. Instead, according to the development team’s lawsuit, he assured them he wouldn’t terminate the sale.

The developers continued to skip their monthly $100,000 deposits, and both sides began trying to put a payment deferral policy on paper.

It’s unclear what caused the change of heart.

“We terminated because they were in default,” said Golombeck when reached by phone, though he wouldn’t elaborate. In its lawsuit, Continuum alleges it was lured into a trap, with the Christmas Eve termination making it impossible to line up funding in time for the end-of-year deadline.

Golombeck requested the escrow agent release the deposited funds, including the initial $2.5 million down payment, to him as a form of damages. Continuum, whose attorney did not respond to a request for comment, sued to stop the termination and escrow payment in January. A judge dismissed the suit Dec. 9, but Continuum filed a largely identical suit on Monday.

In it, Continuum contends that it spent “well over” $5.7 million on the rezoning fight — on consultants, engineers and lobbyists — since its first missed monthly payment. It wants the court to make Golombeck cover those costs and honor the sale agreement.

While Continuum has increased the amount it seeks, its new suit is largely the same as the one just dismissed. “It’s just repeating the same causes of action again. They just tried to dress it up a bit,” said Mitchell Haddad, an attorney at Sills Cummis & Gross representing Golombeck.

Continuum is also suing the city for declining to consider a reduced version of the development that would have shrunk each tower to 17 stories and cut affordability to 25 percent of units.

Eichner promises to develop something on the lot, even if it’s just a market-rate apartment building allowed under current zoning. But to do that, he’ll need to win messy court battles with Golombeck and the city, who he’s suing over the ULURP rejection.

How to Use Social Media Influencers to Market Your Hotel?