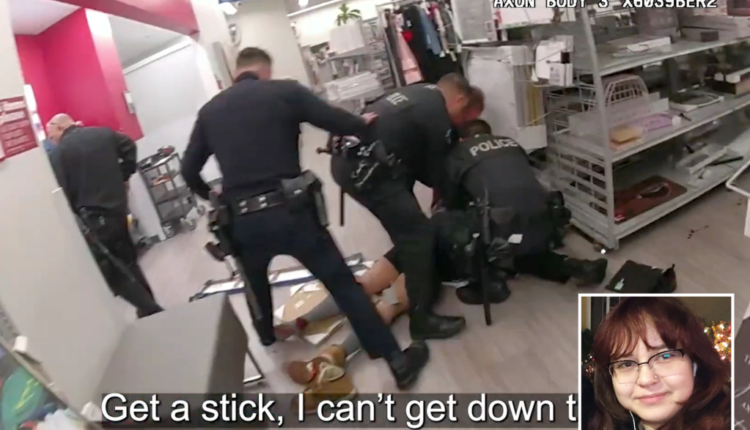 
The heartbroken mother of the 14-year-old girl killed by a stray police bullet at a Los Angeles department store wiped tears from her face Tuesday as she described the moment her daughter died in her arms.

The grieving mom recalled the deadly incident at a press conference in front of the Los Angeles Police Department’s Downtown L.A. headquarters just one day after Valentina Orellana-Peralta’s shooting death at a Burlington store was ruled a homicide.

“Valentina and I hugged each other,” Soledad Peralta said. “She went and locked the door, praying for safety, praying for everybody. We started hugging each other tighter.”

“White powder was coming out of Valentina’s body and she started having convulsions,” Peralta said. “Her body went limp as I was screaming for help. The police did not come to help me or my daughter.”

Peralta said when police did come, they escorted her away but left Valentina.

“They just left her laying there alone,” the mom said. “We want justice for our angel, Valentina.”

The teenager died of a gunshot wound to the chest at the North Hollywood store Dec. 23, a preliminary autopsy revealed.

“It’s like my whole heart has been ripped out,” her father, Juan Pablo, said during the press conference. “The pain of opening a Christmas present for her that had been delivered for Christmas Day cannot be articulated.”

“My daughter was special,” he said. “She had dreams. And tragically, those dreams have been overshadowed by this nightmare that prevents me from sleeping at night.”

Pablo, who recently arrived from the family’s native Chile, held up a brand new skateboard — a present she was excited to show off to classmates, he said.

“She would never get to show them the skateboard,” Pablo added. “We want them to know that our daughter’s life mattered. We want justice.”

He said his daughter had only arrived in the country from Chile six months ago and dreamed of becoming an engineer — and a US citizen.

Cops have said the teen was trying on dresses for Christmas in one of the store’s changing rooms when an unidentified officer fired at a nearby assault suspect attacking a woman.

The bullet that struck the teen skipped off the floor and pierced the wall when officers shot at the armed suspect in the store.

In graphic, 35-minute LAPD video released Monday, blood-curdling screams could be heard from inside the dressing room area where Valentina and her mother were hiding — right behind a wall where officers fatally shot suspect Daniel Elena-Lopez, 24.

The California Attorney General’s Office is conducting an independent review of the case.

Civil rights attorney Ben Crump said the family wants “full accountability” and transparency from LAPD, including access to all of the videos and reports involving the shooting.

“It was foreseeable that two days before Christmas there were going to be people shopping,” Crump said. “The family thinks things could’ve been done differently where Valentina wouldn’t be collateral damage and that she would still be here celebrating Christmas.”

Rahul Ravipudi, another attorney representing the family, told the Post that Valentina did not die instantly from the gunshot wound, and that officers did not get to Valentina and her mother immediately.

Ravipudi said it is still unclear how long it took for officers to render help to the teen based on the footage that LAPD released on Monday.

Ravipudi added LAPD officials are already trying to “spin” the incident by saying that officers did not know there was a dressing room nearby when they shot Elena-Lopez.

“The moment this tragedy happened, some spokesperson for the LAPD said, ‘Well, there was just a wall behind the person they shot,’” Ravipudi told the Post. “But the video reveals something different where they all knew there were fitting rooms back there. The video reveals that the officer knew that there were people in that building. All that tells me is the LAPD is already starting to spin this as something they want to avoid responsibility for. And if there was one case, one moment when the LAPD should communicate and just take responsibility, it’s this case.”

Fox News Urges Viewers to Get Vaccinated, Bear on the Loose at Olympics | The Tonight Show