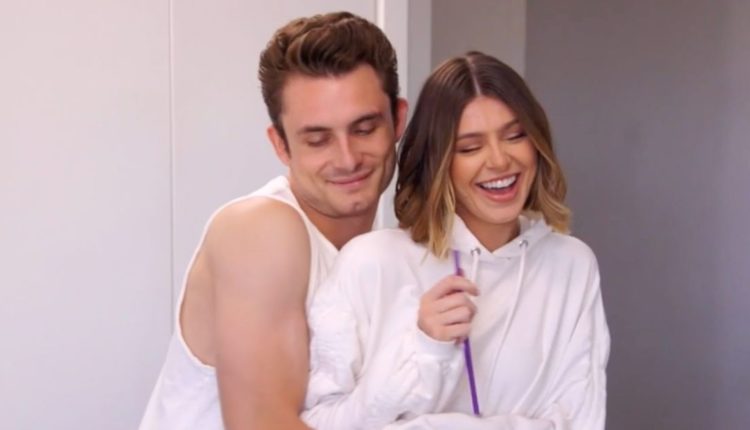 
I don’t know if the holiday season scrambled my brain like the authorities trying to stop a pirate radio station in Pump Up the Volume, but I can no longer comprehend this show. What is even going on? Why is Brock taking James out into the SUR alleyway, California’s most toxic Superfund site, to talk to him about penis straws? Why is Lala having her assistant help Brock stage a fake surprise wedding that wasn’t a wedding at all? Why is Charli back to only ordering coffee and not eating food anymore? Wasn’t her entire storyline that she is eating food? What is going on? The center cannot hold. Everything that rises must converge. In west Philadelphia born and raised.

Maybe this whole thing can be explained by the dissolution of the relationship between James and Raquel, a Depop listing for an original Jonas Brothers tour T-shirt. The hour starts with Raquel getting a visit from her sister/cousin Kate. They’re planning an engagement party in Santa Inez, which Raquel pronounces Santa Eye-nez and no one has the heart to tell her pretty little cocker spaniel mind. When Kate asks about a bachelorette party, James gets all mad about the idea of her sipping out of penis straws and having strippers. Why? I don’t know. He says it’s because he thinks that is tacky. He is not wrong. But also some tacky things are fun. Have you ever been to a Cheesecake Factory? Case closed. Send the jury away with instructions to convict.

After James leaves, Raquel tells Kate that James thinks he knows what is best for her at all times. This brings up other stories from this season, about how he doesn’t want her to go to Brock’s photoshoot for his already-obsolete home workout app. (There has been more talk about this photoshoot than the funeral preparations for Queen Elizabeth II, how have we not seen it already?) Kate says that she thinks James is controlling and Raquel looks at her like a cat who just saw the laser pointer on the wall for the first time.

Later, we see only a snippet of a conversation between James and Raquel where he says, “I thought you liked when I decide stuff for you.” She replies, “No, I hate that. That’s the one thing I can’t stand.” Alright, so either they have never discussed this, which is a bad sign, or they have discussed it many times and James has never taken it in, which is also a bad sign. Either way we know that these two are broken up so does it really matter at all? Hardly. But yet, she persists.

After this conversation, he talks to Lala about it and then she tells Brock about it and Brock feels the need to take him outside at C U Next Tuesday, an event that screams anti-misogyny and not controlling women, and talk to him about, what exactly? What is Brock doing in this scene? Even he doesn’t seem to know. Is he too thick to make reality TV? He is certainly the right amount of THICC to make me follow him on Instagram, that I know.

Brock is also wearing a rainbow striped shirt that he wore to the pickleball tourney, and repeating outfits is a big no-no. Also, this is the gayest shirt known to man. How gay is it? It is so gay, it was completed at the exact moment that “Chromatica II” transitions into “911.” It is so gay that its Instagram only gets ads for jock straps, self-help apps, and CBD douching solutions for the irritable bottom. It is so gay that it is two dudes blowing three dudes and all of those dudes are actually Colton Underwood in different disguises from splits in the multiverse where he went to a gay sauna in LA.

Then Lala tells Sandoval that James doesn’t like penis straws and he has to talk to him about it. Then James has to talk to Lala about how she told everyone that he doesn’t like penis straws and this is all we have. This is it. What was once a many-splendored reality-TV franchise has been whittled down to these barely real snippets that we care about as much as we care whether it’s time to cut our nails. (It is probably time.)

What else do we have? Lisa buying everyone’s foot pics under a fake name? This is obviously constructed but I’ll allow it because it was kind of cute and funny. Also I love that Lisa was so humiliated that no one else would buy their feet pics that she did it to make them feel better about themselves. Then we have Katie and Ariana deciding they’re going to open a sandwich shop even though Katie can’t get a home equity loan, and Ariana’s house is already leveraged into Schwartz & Sandy’s, so they have no money to pay for this but sure, go right ahead. I’ll eat your stupid old sandwich. Oh sorry. Your stupid old Sandywich.

The last story we have to contend with is this fake wedding that Brock wants to do for Scheana. He wants Russel to throw a fake movie premiere so that everyone can get dressed up and then he will propose to Scheana. And then, after he proposes, he’ll have her wedding dress and everything there and they’ll just do the wedding right after the proposal. My initial thought was, “Oh no no no no no no no. A million nos. As many nos as @GiveThemLalaBeauty has followers, which is only 98,700 nos, which is a lot of nos but it’s not a million.” What if she says no? What if she has her own ideas what her wedding should be like? You’re just going to negate that on a whim? Then I thought of Darva Conger and Who Wants to Marry a Multi-Millionaire? and my spirits were slightly raised.

I was also heartened when Lala, who is a friend of Scheana’s, said that Scheana loves surprises and loves a man sweeping her off her feet, so maybe this could work. But Brock wanted all of this to happen in two days and wanted it all for free. I initially thought he just wanted production to pay for it like they did James’s proposal at Raquella (I assume). Or I thought he wanted to use the show and the attention to leverage his brand or something.

But no. We find out when Scheana has non-food brunch with Charli that Scheana knew there was going to be a surprise wedding and had some dresses lined up and that Brock was marrying her for his green card. That’s why there is a rush! It has nothing to do with production schedules, it has to do with him getting kicked out of the country. How is he even doing this show? How is he even launching this app or working in the U.S. at all? This is all a shambles. This is all a bloody shambles and the biggest story of the episode is about an event that isn’t going to happen because Brock has no money and also no green card.

To make it even worse, Tom and Tom are taking a break from each other to Peloton and do gardening and shit, so they weren’t even flirting. In fact, they were both Jonesing. They needed a fix. They needed the warm, nude body of the other Tom against them right that minute, but they were resisting the urge. It was like edging, getting themselves so painfully close but holding out, knowing the eventual release would be worth all of this frustration. Finally, it was Schwartz who caved. He picked up his phone and texted, “What are you wearing?” to Sandoval, who told him a splotch of blue makeup next to one eye and a splotch of white makeup next to the other, and Schwartz immediately soiled the pajama bottoms he had been lounging around in all day, dreaming about his soul mate.

Why Elon Musk and Warren Buffett Don’t Get Along