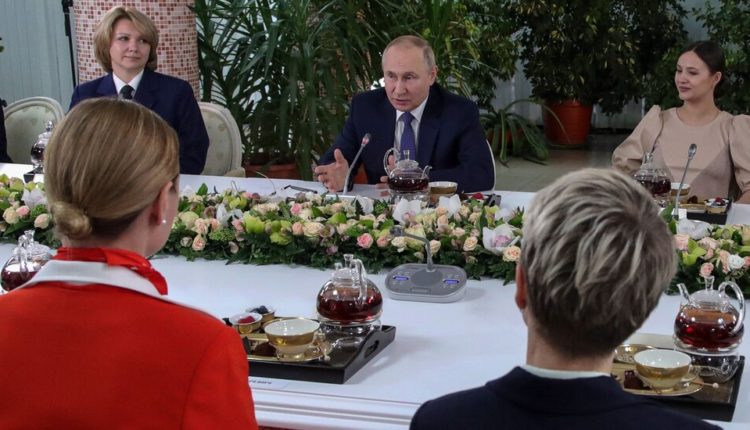 
At a televised gathering with female pilots and crew members from Aeroflot, Russia’s flagship airline carrier, one participant asked President Vladimir V. Putin a question that was perfectly crafted to conform with new government rules for reporting on his invasion of Ukraine.

“We all support your actions, the special military operation that is proceeding there,” said one pilot, seated among some 20 women in Aeroflot uniforms at a long table, each with her own clear glass teapot. “We know that civilians do not suffer, but please reassure us what is at the end of this path.”

Mr. Putin responded with a litany of his grievances against Ukraine, but neither his answer nor any of the questions mentioned the reality of Ukraine — the violent destruction of cities and towns by the Russian military, the civilian deaths, the desperate exodus by millions of refugees. With virtually all media now under state control, that has all disappeared from domestic television screens and newspaper headlines.

To spend several days watching news broadcasts on the main state channels, as well as surveying state-controlled newspapers, is to witness the extent of the Kremlin’s efforts to sanitize its war with the Orwellian term “special military operation” — and to make all news coverage align with that message.

Words like “war” or “invasion” to describe the actions of the Russian military are forbidden under a new law that President Putin signed on Friday. The law mandates up to 15 years in prison for any coverage the state deems “false information” about the military campaign.

“It is not a war on Russian TV,” said Stanislav Kucher, a veteran Russian television host and former member of the presidential Council for Civil Society and Human Rights. Mr. Kucher moved to the United States after his shows were repeatedly shuttered.

Mr. Putin, 69, has long sought to wrap his administration in the heroic actions and terrible sacrifices made by the Soviet Union to defeat Nazi Germany. His annexation of Crimea in 2014 and the destabilization of Ukraine by fueling a separatist war in the east that year was no exception.

The Kremlin portrayed that grinding war as a continuation of the World War II fight by the Soviet army against invading Nazis and their local sympathizers. With his latest invasion of Ukraine, on Feb. 24, Mr. Putin doubled down, repeatedly describing it as an attempt to de-Nazify and demilitarize Ukraine.

So that is the refrain on state media, the main source of news for most Russians, especially the older generation. Mr. Putin himself referred to the government in Kyiv as Nazis about 10 times during his meeting with the female flight staff last Saturday, and the word is repeated endlessly on every broadcast. To reinforce the idea, news channels frequently show black and white footage of actual Nazis.

News bulletins are fairly uniform from one television channel to the next. The “operations” in Ukraine are basically described as a peacekeeping mission by the military to rescue the Russian-speaking residents of the breakaway regions of Donetsk and Luhansk from the terrible war crimes perpetuated on them by the Ukrainian government. The West is described as completely unsympathetic to their plight.

The vast destruction visited on the city of Kharkiv and many smaller towns in the northeast usually merits at best a passing reference, or is blamed on Ukrainian forces.

On Sunday, “Vesti Nedeli,” a widely watched program on Rossiya-1, seemed to use one report to prepare Russians for the brewing battle for Kyiv. It noted that Russian forces had cut off the Ukrainian capital from the north and the west, with battles continuing in the suburbs. Then it accused the Ukrainian military of preventing civilians from leaving so they could be used as human shields. The tens of thousands of refugees fleeing west away from the Russian forces in caravans of fear and misery were not shown.

The 2 p.m. News on Saturday on Channel One, one of the two most popular channels along with Rossiya-1, was typical in this tale of two wars.

It started with the anchor quoting Mr. Putin, saying that the “special operation’’ was proceeding as planned. The destruction of the military infrastructure will be completed soon, he added.

It blamed extremist Ukrainian forces for dynamiting a building in the port city of Mariupol on top of 200 people sheltering in the basement, but there was no footage.

Denis Pushilin, the head of the Donetsk People’s Republic, one of the rump states created by Moscow after the 2014 invasion, complained in an interview that civilians did not use the humanitarian corridor meant to reach the Russian-controlled east, but risked danger by heading west. Ukrainian officials said they could not use the corridor because Russian forces were shelling it.

“Vesti Nedeli” went into extra time on Sunday evening with extensive reporting from the war — though of course not using that term. It repeatedly described the conflict as almost won. It did profile one soldier who was killed, but he was conveniently from Dagestan, one of the Muslim Republics in the Caucasus, not from the Russian heartland.

Fallout from the sanctions that are dismantling the Russian economy, like the ending of international flights by Russian airlines, is often attributed to the current “circumstances” without further explanation.

Most television anchors and talk show hosts, even those who initially expressed vague reservations about the invasion, have quickly adjusted their comments. Some of the more prominent Kremlin cheerleaders have been targeted by Western sanctions. Italy, for example, seized the nearly $9 million dollar Lake Como mansion owned by Vladimir R. Soloviev, a prominent talk show host.

Vyacheslav Nikonov, host of a current affairs program on Channel One called “The Great Game,” gave a belligerent speech in the Duma, or parliament, on the day after the invasion, which he echoed on his show.

A halt to Russian sales. After days of seeming reluctance to take a stance over Russia’s invasion of Ukraine, three high-profile American food and beverage companies — McDonald’s, Coca-Cola and Starbucks — said they were pausing operations in Russia.

A humanitarian crisis. Indiscriminate Russian shelling has trapped Ukrainian civilians and left tens of thousands without food, water, power or heat in besieged cities. The United Nations said that the number of refugees who have fled Ukraine has reached two million.

He described how much he loved Ukrainians and their wonderful country. “I think Russia is, of course, interested in it being a prosperous, friendly country,” Mr. Nikonov said. “Our cause is just. We shall be victorious.”

The last lines echoed a radio address given by his grandfather and namesake, Vyacheslav Molotov, Stalin’s longtime foreign minister, on June 22, 1941, to announce that Nazi Germany had invaded, breaking a nonaggression treaty, the Molotov-Ribbentrop Pact.

This is all in sharp contrast to reports by Western and Ukrainian news media on the fighting in the northeast, with houses going up in flames and civilians lying dead in the streets. There was dramatic footage Saturday of a Russian MI-24 helicopter gunship erupting in a ball of flames after being struck by a surface-to-air missile.

The Kremlin has waged an extended assault on independent media for the past decade, and some of the last redoubts shut down last week in the face of the new law. That included two stalwarts: Echo of Moscow, an independent radio station that was kind of a family living room for liberal Russians, and TV Rain, a television channel that had bravely broadcast segments like an interview with the father of a young soldier shown captured in Ukraine.

For the younger generation that does not watch television news, Telegram has become the app of choice on both sides, said Kevin Rothrock, the managing editor for the English edition of Meduza, an independent news agency still operating from outside Russia.

Videos of President Volodymyr Zelensky of Ukraine speaking in Kyiv, for example, are posted there first. Scenes of angry Ukrainians shouting “Occupiers!” at Russian soldiers in Kherson or elsewhere are readily available, but not mentioned in Russia.

To try to reach the younger generation, both the Ministry of Enlightenment and the Ministry of Education in Russia have produced videos detailing the official explanation for the war; they were mandatory viewing in schools.

Novaya Gazeta, an independent newspaper whose editor, Dmitri Muratov, shared the Nobel Peace Prize last year, has tried to follow the new guidelines. In stories where people interviewed said “war,” for example, there are ellipses and the phrase “word prohibited by the Russian authorities.”

Some news circulated outside the official filtering. Leonid Ragozin, a freelance journalist, said that a relative on a Moscow bus was talking to a frightened friend in Kharkiv, with sirens wailing in the background. She put the call on speaker phone and the whole bus went silent to listen. Nobody complained.

Still, the onslaught of the official state version seems to be having the desired effect.

Various Russian polls show considerable support for the war — about two-thirds of the Russian public — although experts say that pressure to parrot the official line must be taken into account.

Mr. Kucher, the former independent TV host, said he was taken aback at how often the Kremlin talking points about fighting Nazis in Ukraine were echoed back to him in telephone conversations with former classmates.

“I was so stunned,” Mr. Kucher said. “I never would have thought that propaganda would have such an effect on people.”