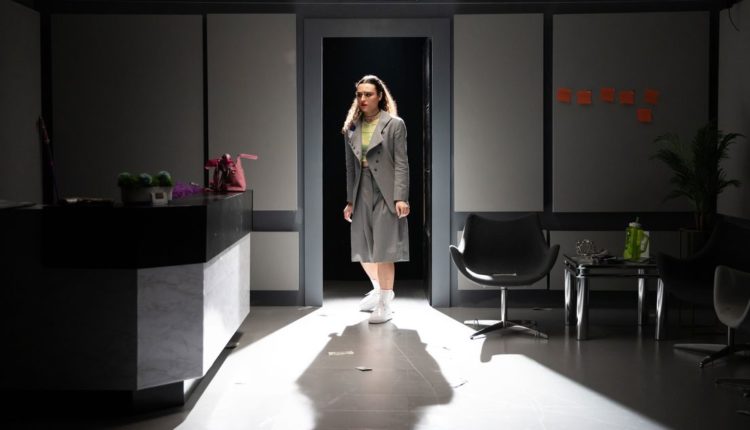 Notes on Killing… at Soho Rep

When Fran Lebowitz wrote in 1997 that “things are very rarely exactly like other things,” she was fuming at our tendency to make category errors. Types of oppression and racism cannot be meaningfully described by analogy, she wrote, just as nothing can be said to be “like” the enslavement of Black Americans or the Holocaust. These kinds of conflation are weak-minded and lazy — and in the 25 years since, we haven’t exactly gotten better at categorization. Much that is not violent is called “violence”; much that is not traumatizing gets labeled “trauma.”

So Lebowitz was there in my mind, shouting, as I watched the latest production at Soho Rep, the conceptually wobbly political comedy Notes on Killing Seven Oversight, Management and Economic Stability Board Members. (What a title! The title is my favorite part of the show.) Part agitprop invective about Puerto Rican independence, part miniaturized drag spectacle, Mara Vélez Meléndez’s play deliberately confuses categories, scrambling them together to establish a spurious comparison: the freedom of Puerto Rico as a metaphor for internal liberation (or vice versa). As the two anti-imperialist revolutionaries in the show shuck off cis heteronormativity, they congratulate each other for “decolonizing” themselves. Vélez Meléndez’s characters cry out things like:

I (and my inner Fran) were silently screaming. Gender is not nationhood, and self-sovereignty is not self-governance. To decolonize, someone needs to get some goddamned land back.

Notes starts with a prologue. Our narrator, Lolita (Christine Carmela), is assembling a pistol — it was her father’s, she tells us. For her whole life, U.S. governance of Puerto Rico has only gotten worse, leading to the territory’s “unpayable” debt and increasingly shaky infrastructure. The 2016 passage of the Puerto Rico Oversight, Management and Economic Stability Act — aka PROMESA — placed an unelected board in charge of the island’s affairs, a solution so odious it led to street demonstrations. Now Lolita has come to New York, “tired of this shit.” Her namesake, the Boricua revolutionary Lolita Lebrón, fired a gun into the House of Representatives in 1954. Now the modern Lolita has stormed into PROMESA’s Wall Street offices, intent on finding the seven (titular) board members. Unlike Lebrón, she’s not going to fire in the air.

Do we hesitate to kill our leaders because we’re tired?

Or … are we tired because we keep hesitating to kill our leaders?

Vélez Meléndez’s plot stops her there, in the Board’s lobby, where a mysterious Receptionist (Samora la Perdida) helps Lolita refine her plan. Reality here is a little smeared and dreamy, so the Receptionist’s help consists of a series of drag performances. The Receptionist gives Lolita a new glittery prop gun, then dresses up as each of the seven board members in sequence, thus allowing Lolita to rehearse each assassination. As if that’s not a big enough to-do list, Lolita is trans, and she encourages the Receptionist to move beyond binaries (which they already seem to be doing).

La Perdida’s drag impressions are many steps removed from impersonation. For instance, there is in our world a real man called David Skeel, an actual member of the Oversight Board, and Lolita reads facts about him from a binder (“Professor of Corporate Law University of Pennsylvania…” etc., etc.). But to “play” Skeel, the Receptionist sashays into the room dressed as a glittering bishop, complete with religious robes, miter, and scepter. “Previously known as Father David Skeel, I am now BISHOP!!!! AVID!!!! SILK!!!!” shouts the Receptionist. “Communicator of the divine…Prophet of the Profiteers…and Messenger of God!!!!” Sorry, what?

Notes is woolly-minded, but every now and then, it draws on deep wells of feeling to organize itself. Vélez Meléndez is clearly keen to use her theatrical tools to actually change the situation in Puerto Rico and to strike a blow for trans representation and freedom, but for the most part, if she succeeds, it’s in moments between the lines. La Perdida, for instance, is often spouting nonsense (the “Prophet of profit” stuff is the least of it), but they do have a wonderful air of businesslike detachment, which makes their throwaway moments quite crisp and funny and despairing. But while I like ontological mayhem as much as the next weird art freak, this is not that kind of generative confusion.

Despite its high production values, David Mendizábel’s production feels more like a workshop presentation than a finished project. Mendizábel also designed the costumes, which are amazing, and perhaps the pressure of designing an entire drag race alone has left other elements, particularly pacing and performance, untended. This sloppiness makes it difficult to trust the show to have weighed its statements, especially the (forgive me) loaded ones. Vélez Meléndez wants to discuss Puerto Rican independence and revolution, and discussing revolution means discussing means. Lolita has a gun. Does she actually intend to call for violent resistance, or does Vélez Meléndez want us to think laterally and allusively? I would call that an important question. But the play’s two styles — goal-oriented political theater and a drag fabulousness parade — don’t play well together. The latter genre convinces us that the show is not actually speaking literally, that the show sees the call for revolution as part of a camp spectacle. Is it a wig? Is that my hair? Is it a coup? Is it a joke? Are you serious right now? Bishop, please.

Notes on Killing Seven Oversight, Management and Economic Stability Board Members is at Soho Rep through June 19.

Sign up to get New York’s week in reviews.

One hundred days of war in Ukraine have left 5.2 million children in need of humanitarian assistance