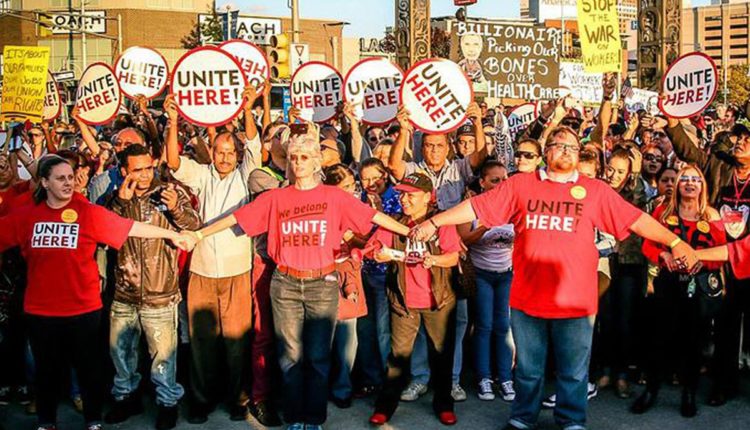 Atlantic City union contracts that dictate pay and working conditions for most employees at the nine casino resorts expired as of 12:01 am this morning. With negotiations remaining distant from new terms being signed, union leadership says pickets will begin this evening.

Unite Here Local 54 — the primary casino union in Atlantic City — represents some 10,000 workers employed by the resorts in an array of positions, including housekeepers, restaurant staff, porters and bellmen, and casino cocktail servers. The union does not represent table game dealers or slot machine techs.

With new contracts seemingly distant, the union will begin expressing its frustrations with the casinos publicly this evening by picketing outside the Tropicana. The peaceful protest encouraging patrons to tell the casino to pay its workers appropriately will commence on the Boardwalk.

We’re looking forward to our action Wednesday night. We have a long way to go before we get a contract,” said Unite Here Local 54 President Bob McDevitt.

As for how far off talks remain, McDevitt said he has no prediction as to when the negotiations might be settled.

Unite Here brass are primarily negotiating new labor terms with executives from MGM Resorts and Caesars Entertainment. The two companies are the largest casino operators in terms of gaming revenue in Atlantic City.

McDevitt says the union’s main goal of the trade talks is to secure higher wages for its members. While previous negotiations focused on improving working conditions and obtaining better health and retirement benefits, the Local 54 chapter says this time around it’s all about the money. The union boss stated recently that only a “significant” increase in pay will be accepted.

Brick-and-mortar casino gaming revenue is only beginning to return to pre-pandemic levels. But when inflation is factored in — each casino’s overhead surging amid higher costs for everything from hotel toiletries to energy bills — the resorts presumably won’t be overly inclined to jack up hourly rates and salaries. But with June here and Atlantic City’s busiest time of the year underway, the union could have the upper hand.

The union says it has long fought for a middle-class standard in its casino negotiations, but such a benchmark is “now threatened by the skyrocketing cost of living and the continuing impacts of the pandemic.”

In preparation for their contract negotiations, Unite Here Local 54 surveyed nearly 2,000 of its members to gauge their economic standing. Of those polled, 61% said they struggled to pay their rent or mortgage on time at least once in the past year.

Thirty-two percent said they lacked money for food at some point in 2021, while 37% said they failed to pay their utilities on time. Jessica Sanchez, a housekeeper at Bally’s for more than 24 years, says her pay has not kept pace with non-gaming competitors.

In a January press release from the Casino Association of New Jersey (CANJ) highlighting 2021 gross gaming revenue, CANJ President Joe Lupo said 2021 represented “modest growth” but the industry “continues to feel the impact of the pandemic.”

“Throughout 2021, the Atlantic City casino industry and its many great employees worked diligently to rebuild and recover from the COVID-19 pandemic. While the COVID-19 pandemic continues to impact our industry in the New Year, our outlook remains cautiously optimistic for the upcoming year, as we saw increases from 2020 to 2021, and we anticipate the same for 2022,” Lupo said.