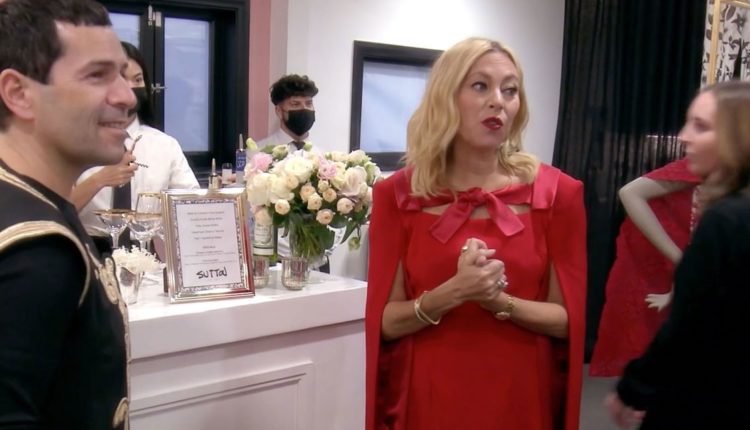 
This week on our favorite show Rich Women Doing Things, the rich women did things. They ordered a breakfast spread to their hotel room with enough mini muffins and lox to feed a fleet of starving interns who aren’t paid enough to eat Jack in the Box. Who did the rich women think was going to eat all of this food, one of their untrained dogs just grabbing it off the table? They threw parties in their boutiques and then wilted when the conversation turned to dead worms. Their husbands suggested they go on a trip to Mexico to get over their recent traumas, even though this trip was arranged by producers probably months ago.

But mostly, the women talked about Crystal for the second week in a row. Last week I titled the recap “The Dark Crystal” in honor of the animated puppet movie that haunted my nightmares as a youth but also because we saw a different side of Crystal Kung Minkoff. I am so mad because this week the show focused on Crystal and the use of the word “dark,” and I feel like I somehow manifested this entire episode into existence.

Before talking about Crystal, we also need to bring up a little scene with Erika. As the women are sitting around Kyle’s desert house, Erika says that it was a year ago that she was at Kyle’s house right after the news of her divorce and Tom’s lawsuits broke and she was a “shambles.” She says, “Thank you for accepting me for the wild animal that I was,” which seems slightly like an acknowledgment that she behaved poorly last year except that the person she behaved the worst to, Sutton, is not there and she refuses to apologize for it.

Garcelle says the reason why she was raked over the coals was that she didn’t show compassion. Erika replies that she couldn’t because when you’re in a legal situation, every word counts. She shouldn’t have to explain this to a group of women who spent a whole season litigating the word “violation” and will now spend another season litigating the word “dark,” but alas.

Erika then drops a real doozy, saying, “We’re not even sure that there were people that weren’t paid.” Okay, okay, okay. I see what Erika is trying to do here by using a rhetorical device to say, “This thing is a long way from over, and there is still a lot of investigating that needs to be done, and we don’t have all the facts yet.” However, this is the worst possible way to say that. I mimic Garcelle by saying, “Come on!” There are various groups of people all in the same situation. There are all the stories in the press, done by well-regarded investigative journalists, pointing out how this happened. Something certainly happened, and insinuating that it didn’t, well, this is what is really turning fans off and making Erika look callous to the victims.

Thankfully for Erika, Crystal shows up almost immediately in an immaculate navy blue lace and mesh top and diverts all attention away. She’s talking about how no one respected her feelings last year when she said Sutton violated her, and Dorit, in confessional, counters with, “Saying you don’t feel like you’re in a safe space because a group of adult women don’t agree with you? Sweetheart, this is a vacation compared to what I went through.” This just proves her point! First of all, she wasn’t comparing what she went through with what Dorit went through. Secondly, you’re still not letting her feel her feelings by telling her that the space she doesn’t think is safe is actually safe. The word “gaslight” is more overused than my PReP prescription after Pride Weekend, but, honey, let that flame burn bright up in here.

The real attack, however, comes from Garcelle. After Crystal was really honest with the women, Garcelle decides that it is time to revisit what happened the year before, which is something that Crystal said, expressly, that she didn’t want to happen. Garcelle says that she feels like when Crystal said, “Are you really that girl?” to Sutton on their cast trip, it was a setup, and she was going to say that no matter what Sutton said. This is absolutely ludicrous. As Crystal says, that was the first time she talked to Sutton; why would she want to set her up, and how would she know how to do it? Also, she only said that because Sutton inadvertently said something racially insensitive. If Sutton hadn’t said it, how could she have “Are you really that girl?”-ed her?

After Garcelle says this, Crystal says it couldn’t have been a setup because Sutton said some very “dark” things before her comment, but she refuses to say what those things are. Later in the episode, she explains it perfectly. If someone accuses you of murder, you can’t just say, “I didn’t do it,” you have to say that and give an alibi. This was her alibi, and she only brought it up because Garcelle backed her into a corner. Hopefully, it was not a corner that Kyle’s dog Bambi was just in because you know that dog piddles wherever the hell it wants.

Garcelle breaks up the party by telling everyone her son, Oliver, just got a job working for Lisa Vanderpump, and it was a bomb so big that they could hear the explosion all the way in Kansas City. That’s all the explanation we’re getting? What is he doing for her? Is he going to work at SUR? Is he on the next season of Vanderstupid Drools? Screw this stupid bullshit with Crystal; I need a 23-minute YouTube documentary about this moment.

This all boomerangs back at Sutton’s party, mainly because both Kyle and Garcelle tell Sutton that Crystal has been talking about her. Kyle better watch out because Garcelle is coming for her EP credit this season. Get her in the Producers Guild of America. When they tell her this, Sutton says she just wants to move forward. Kyle thinks it’s because Sutton is trying to cover something up, but do we think that Sutton is this smart or calculating? This is the face roller lady. This is the “let the mouse go,” lady. She is as calculating as an abacus that’s lost half of its beads.

I feel this same way about my little baby bird, Crystal. Dorit says that she is keeping mum about what Sutton said because she knows the worst thing to do is not to mention it and let people believe she went on some kind of Joe Rogan racist diatribe or Marjorie Taylor Greene giving out her gazpacho recipe. That is not something Crystal would do. That is something Kim Richards did when she brought up Harry Hamlin at that Amsterdam dinner because Kim is someone with malice in her mind and garlic on her breath. Crystal is just out here in Brooklyn trying to make it in this economy. (OMG, Crystal is the Alex McCord of RHOBH.)

As all the ladies sit down, they all implore Crystal to say what Sutton said because, hello, there are EP credits to be handed out and Kyle wants to collect them all like they’re Pokemon wearing kaftans. The odd thing is, neither Crystal nor Sutton care. They both just want to squash it because they have moved on, and Crystal has forgiven Sutton and they’re good. All of the women get upset that Crystal “threw Sutton under the bus” and brought up this thing that she never wants to tell anyone about. I need to remind everyone that this is not Crystal’s fault. The only reason this came up is that Garcelle forced her to talk about it when she made a completely baseless and wild accusation. I’m sorry, but the blame here is a snotty five-year-old and Garcelle is a mall Santa because that blame is not leaving her lap until it gets a tiny candy cane.

My favorite part of the argument, however, is when Crystal sits down to talk about it, and she says, “If we continue this conversation, I don’t want to be told the word ‘dark’ is too much, and it comes down to a word.” Of course, it comes back to that. Leave it to the rich ladies who do things to make a whole sentence out of one word. Next year can the fans vote on the word? I nominate “detergent.” Try to get someone fired over a semantic argument about Tide Pods. Go ahead. I dare you.

All of this is petty and silly next to what Dorit went through. I am both fascinated and terrified by her reaction to the trauma of her break-in. One of the things I love about Housewives is when the darkness burbles up from below the surface, but this season the darkness is not under Dorit’s surface; it’s right there on the top like a Gucci-print sweatsuit or some ugly-ass accessories she has pinned to her scalp. It is so raw and so real that I can’t look away, but I am also afraid for her being on television when she is so fragile.

While they’re in the car on the way to Sutton’s party, Kyle says that there was a person taking pictures over her gate and says it must be the paparazzi. You can see the panic attack roll over Dorit like a cold breeze. She immediately thinks someone is casing Kyle’s house because that’s where her brain is. She is still stuck in that room, begging for her life and hoping that her children won’t be killed.

She says that the headline of her being shot and her children found dead will haunt her forever. That’s what the problem is here. It’s more than a break-in. It’s more than what was stolen from her. It’s more than just losing her piece of mind. Dorit was someone who thought it would always work out, that her life would always be sunshine and unicorns and poorly-named swimwear lines. She couldn’t conceive of anything horrific happening to her.

Now all she sees is doom. All she can think of is the dead corpses of her children, of her life cut short. It’s these insidious thoughts that can be planted in your brain and take over like an invasive species. I give her credit for doing everything she can, including EMDR therapy. But, man, watching her relive that night, frame by frame, with tears streaming down her face and the fake fireplace in her wall belching its hot breath on her back was so difficult to watch. I could just see the darkness in her brain; the edges of it tickled with silver like an old photograph or a ball of mercury splattered on a table. I could see the scene with her; I could hear their footsteps, the metal clack of the gun, the pleading, the knap of the carpet under their boots, all of the details, all of the stupid things you think of in that moment. I could feel the terror, I could feel the sadness, and I wanted to rip into that darkness and find a way to knit it back together, but I don’t have the tools. None of us have the tools.

Dame Brian Moylan breaks down all the gossip and drama, on- and off-screen, for dedicated students of the Reality Television Arts and Sciences.