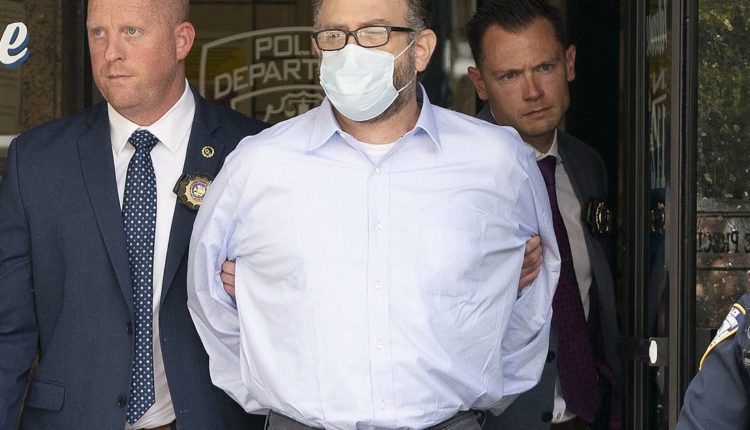 
A crazed Queens takeout diner with a gun and a bizarre grudge was charged Thursday with the fatal April shooting of a beloved Chinese restaurant deliveryman, the last lethal chapter in a festering feud over duck sauce.

Glenn Hirsch, 51, was jailed for the April 30 slaying of the deliveryman who had no part in his petty spat with the manager at the Great Wall restaurant, where the insanity began this past Nov. 30 over the defendant’s demand for extra packets of the sweet-and-sour condiment, authorities said.

The argument “became an obsessive point of contention for the defendant, who began to stalk and harass employees at the restaurant for months,” said Queens District Attorney Melinda Katz. “The tragic end result was the murder of a hardworking employee, who left behind a devastated family.”

But there was no evidence the doomed deliveryman, a father of three, played any role in the feud between Hirsch and restaurant manager Kai Yang that stretched from late November to this past April, said Russo.

“This is a guy that’s worked in a restaurant for 10 years, hardworking guy, every day out, rain or snow,” said Russo. “It’s a sad case. … A person that over the course of four months, over a minor thing to us — it wasn’t so minor to him.”

The oft-arrested Hirsch, in a Queens courtroom appearance one day after his Wednesday night arrest, pleaded not guilty to murder, criminal possession of a weapon, criminal mischief, menacing and stalking.

Sources told the Daily News the suspect has a criminal history of 10 arrests between 1995 and 2012, all sealed and one involving an armed robbery.

Hirsch was ordered held pending a Tuesday bail hearing in the killing of Yan, who was blasted in the chest while aboard his delivery scooter near 108th St. and 67th Drive in Forest Hills.

The 50-year-old defendant, who faces up to 44 years behind bars if convicted, appeared agitated during his appearance.

Cops found eight guns when they searched the home of Hirsch’s wife late Wednesday, although it remained unclear if any were used in the murder, police sources said. The couple are separated but on good terms, sources said. They live about a half-mile apart in upscale Briarwood apartment buildings.

Investigators believe the wife was storing the guns for Hirsch, who does not have a license to legally own any weapons.

Cops also searched the suspect’s apartment and car, with police declaring both were in total disarray.

“We are all relieved that someone has been arrested,” said Yan’s widow Eva Zhao in a statement. “We are grateful to the NYPD and have full confidence that the Queens district attorney will bring justice to Zhiwen Yan, a loving and kind husband, father, son, friend and community member.”

Police quickly focused on Hirsch and eventually developed enough evidence to arrest him without incident, an NYPD spokesman said.

“He hates Asian people,” restaurant manager Yang told the Daily News Thursday. “He said he wanted to kill all of us.”

The victim’s family attorney Jennifer Wu expressed dismay there was no hate-crime component in the charges: “An attack on one is an attack on all.”

The victim became a favorite of customers along his route, recalled for his cheery greeting of “Hello, my friend!” to one and all. One customer told the Daily News that Yan was just a “wonderful, wonderful person. He would do anything for anyone. He really cares about everyone.”’

One of Hirsch’s neighbors was left reeling after learning of the accused killer living in the same building.

“It’s just shocking to know you live among people that have a feud like that,” said the woman, who declined to give her name. “What kind of rage did you have? It’s absolutely a sense of depravity.”

Hirsch’s elderly mother, who he frequently visits, lives close by the restaurant.

Yang, through an interpreter, told The News last month that he first clashed with the suspect in November when Hirsch picked up an order of Chinese food, grabbed all the duck sauce from a self-serve station and left — only to return with a complaint.

Catch up on the day’s top five stories every weekday afternoon.

“You didn’t give me enough duck sauce,” the customer said, according to Yang, 53.

The dispute accelerated from there, but Yang thought the incident was in the past until a Jan. 28 run-in where Hirsch allegedly menaced him with a gun, slashed his tires and dented his vehicle, police said. “Do you remember me?” Hirsch asked Yang, according to police sources. “I have a gun, this is the last time I will tell you!” he allegedly added, according to prosecutors.

After allegedly vandalizing a worker’s car on another day, he approached a worker with a gun and said “How’s your car? I will kill you and your entire family!” prosecutors said in court Thursday.

Yang said Hirsch damaged the locks on the restaurant and three times slashed the tires on his Honda CRV. Cops had made no arrests and were still investigating those cases when Yan was slain.

HIrsch’s lawyer, Michael Horn, admitted his client had gotten into the initial bizarre dispute with the restaurant but claims he is being wrongly accused of the harassment and killing that followed. “The DA is conflating the evidence,” Horn said.

Andres Villa, a friend of the slain deliveryman and regular Great Wall customer, recalled the killer created an atmosphere of terror around the business after the slaying.

“Scared, fear,” he recalled. “We thought he might come back. A person with a gun and 10 prior arrests. … Really afraid that he would come back and hurt them.”

2022 World Series of Poker Now Underway • This Week in Gambling