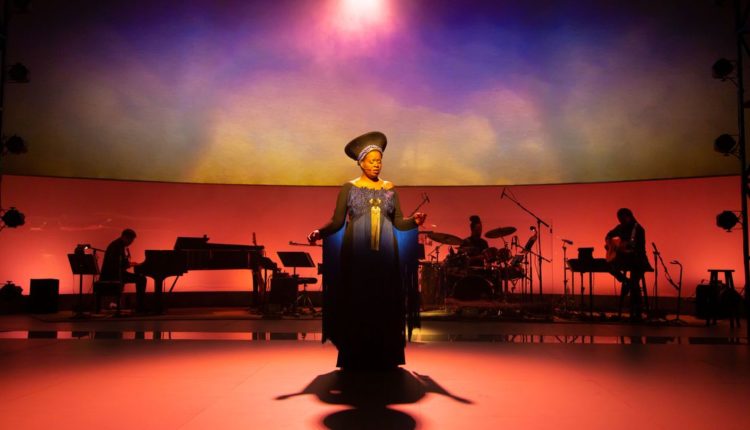 It’s not a good sign when you flip your program open during intermission to answer the question How did this get here? — but there I was, as soon as the lights came up. For one thing, the musical Dreaming Zenzile doesn’t seem to belong downtown at New York Theater Workshop (the little venue’s acoustics baffle the spoken sections into inaudibility); for another, it seems unfinished despite evident musical virtuosity, a long development, and an encyclopedic list of producing partners. These include NYTW, Octopus Theatricals, National Black Theatre, Arts Emerson, the McCarter Theater Center, the Apollo Theater, and the Repertory Theatre of St. Louis. That’s a lot of co-production. Yet somewhere in all that collaboration, Somi Kakoma’s bio-musical about the great South African singer Zenzile Miriam Makeba has slipped halfway through the cracks.

According to the program note, it originated with a memorial concert: After Makeba died in 2008 — her heart failed during a concert — Kakoma, a lauded jazz vocalist and songwriter who goes by Somi, organized a wide-ranging, multi-musician tribute. This, then, is a descendent of that historic event, and whenever you can trick yourself into experiencing the show purely as a concert (usually mid-song), it contains force and extraordinary beauty. The second note in the program is from Somi herself. She emphasizes self-discovery: “Writing Dreaming Zenzile has been a deeply personal journey that perpetually demands that I also reflect on my life as a Black woman, an African voice, and an artist.”

It’s no wonder, therefore, that there’s a deep conflict between the show’s being a portrait-as-tribute and this more personal pursuit. There’s certainly a lot of Somi onstage: She plays the star, and her own songs crowd uncomfortably against the ones originally performed by Makeba. Her voice doesn’t particularly recall Makeba’s flexible half-cry sound, but it has its own rich valences — a hooting whale-song resonance at the bottom of her range, a fluid sweetness at the top. This sonic quality cannot conceal, though, how new she is to creating and shaping a dramatic event. (Her far more theatrically experienced director Lileana Blain-Cruz does not seem to have aided her sufficiently.)

The framing device is her main trouble. At a re-creation of Makeba’s final concert, four sangoma figures — ancestors, ritual healers, and psychopomps all in white – tell us that they have come to usher the singer home. In Xhosa, zenzile means “you have done it to yourself,” and the spirit-chorus assures Makeba that she must do even death to herself. They won’t take her until she’s ready. “Aren’t you tired, child?” they ask. “Tired of fighting for a destiny you’ve already fulfilled. / Tired of fighting yourself.” This sort of syrupy talk is confusing and, repeated over two and half hours, absurd. According to the musical itself, Makeba didn’t actually fight her destiny, which, in this hagiography, was either vocal excellence or political efficacy or both. The more the sangoma chorus flatters her, the less we trust them, which is a problem since they usher her through vaguely acted-out memories — swift recaps of childhood struggle, falling in love with jazz, early marital abuse, later marital adventure (with Stokely Carmichael), anti-apartheid activism — while singing.

Zenzile does manage to avoid one of the common traps of the biographical portrait musical. “Like a Wikipedia page set to music,” we whine about anything that tracks along with the historical record, which is a weird insult considering how much fun reading Wikipedia can be. What we mean is that there is too often a “this happened, then this other basically equivalent thing happened” breathlessness about cradle-to-grave dramatic structures, a tendency to move in lists rather than stories. Kakoma solves that issue by skipping a lot (even the highlights) and murmuring through the rest. We rarely get a sense of the political risks Makeba took, apart from the reminder that she was  barred from South Africa when her mother died and a quick mention of an American exile. I wasn’t even sure which of the songs had been Makeba’s, nor of where she was performing them, nor of what they meant to the world or to her.

Clarity might not be the point, not in something with “dreaming” in the title. Hard as it is for me to believe, it may be intentional that the sound designer Justin Ellington chooses plumminess over crispness every time, allowing so much incomprehensibility. In the second half of the show, Makeba’s marriage to Carmichael happens at the speed of light, and she tells him, caressingly: “Someone once told me that I pick men like some folks pick fruit. It’s true. You are my fourth husband.” He is? Did she marry other people and I missed it? And … why does she need to tell him that he’s No. 4? She’s speaking only to us; the logic wobbles..

Even if we are in a dream, Makeba’s true presence seems too far off. Perhaps this disconnect stems from seeing Somi play Mama Afrika as a doe-eyed, uncertain figure, asking a ghost of her mother  “Am I ready? Am I enough?” as she steps into a spotlight for her first New York performance. No, no, no. By the time Makeba had come to New York, she was already an accomplished star, unlikely to balk in front of any audience. Somi’s overacting in these moments, amplified by some occasionally cartoonish performances from the chorus, exaggerates what feels false to begin with.

Still, the music is glorious. There’s a spectacular sequence, for instance, while Somi is offstage changing for the curtain call, when the remaining singers do an ecstatic number with the band, exchanging rhythms and melodic lines, laughing at one another’s antics (the drummer tossing his sticks in the air), hoisting the emotions of the room behind them like an enormous sail. The exhilaration of it makes up for much that has gone before. And Somi, the sangoma chorus (Aaron Marcellus, Naledi Masilo, Phumzile Sojola, and the astonishing Makeba-esque Phindi Wilson) and the instrumentalists (Toru Dodo, Pathé Jassi, Hervé Samb, and Sheldon Thwaites) are some of the finest musicians performing in New York, so the chance to hear them, even in a misfiring musical, is a gift. Some of that gift … you can buy. Somi has recorded an album called “Zenzile: The Reimagination of Miriam Makeba.” It’s ravishing. In fact, I am listening to it, dancing in my seat, while I write this review.

Dreaming Zenzile is at New York Theater Workshop through June 26.

Sign up to get New York’s week in reviews.

"And He Causes All"- Prophecy Of New York Tech, The Mark Of The Beast and "Forced V/cc/ines"