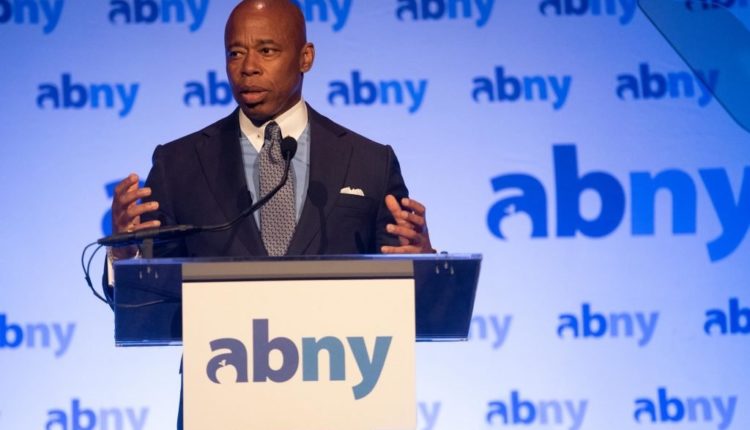 Mayor Eric Adams wants to turn New York into a city of “Yes in my backyard.” During an event hosted by the Association for a Better New York (ABNY) on Wednesday, the mayor introduced three citywide zoning amendments that would spur affordable housing creation, support small businesses, and reduce the city’s carbon footprint. Under Adam’s “City of Yes” plan, the Zoning for Housing Opportunity amendment would allow for a variety of housing types, make it easier to convert office space into housing, and reduce “unnecessary parking requirements” at developments.

“We are going to turn New York into a ‘City of Yes’ — yes in my backyard, yes on my block, yes in my neighborhood,” Adams said.

“These proposals focused on economic recovery, affordable housing, and sustainability will remove red tape for small businesses, expand housing opportunities in every neighborhood, and accelerate the transition to our energy future. New Yorkers are not going to wait around while other cities and other countries sprint towards a post-pandemic world, and now we won’t have to.”

Under the amendment, Adams said affordable and supportive housing opportunities could be expanded by increasing the floor area ratio (FAR) for all affordable housing and expanding the variety of housing types and sizes permitted.

To free up even more space for new homes, the city would identify underutilized commercial buildings and excessive parking requirements and convert them into housing. Currently, developers of most new residential developments must create off-street parking spaces for both as-of-right and rezoned projects.

As 6sqft reported in March, some officials are calling for the end of minimum parking requirements and asked as a temporary measure, the Department of City Planning to encourage developers to include special permit applications to waive parking requirements for any residential project subject to rezoning.

Adams also introduced two other major citywide zoning amendments, the Zoning for Economic Opportunity and Zoning for Zero Carbon. The former will equip local businesses with the proper tools to be successful in a “post-pandemic” city, including lifting restrictions on nightlife, making it easier to repurpose space, and allowing for businesses to “expand without relocation.”

To accelerate nightlife’s recovery, Adams has proposed a change to the city’s zoning regulations that would make it easier for city bars and restaurants to host dance events, according to the New York Times.

In 2017, former Mayor Bill de Blasio repealed the city’s 1920s Cabaret Law, making it “legal to bust a move without getting busted in the city’s drinking and gathering establishments,” as 6sqft reported at the time. The law originally targeted jazz clubs that came about during the Harlem Renaissance, joining another racist regulation of the day: a ban on saxophones and other instruments seen as “Black” at unlicensed establishments. The city had even required performers to hold a “New York City Cabaret Card.”

“Now that the historically discriminatory Cabaret Law was repealed, we applaud Mayor Adams for taking the next critical step to eliminate the dancing prohibition at so many of our city’s restaurants, bars, and nightclubs,” Andrew Rigie, executive director of New York City Hospitality Alliance, said.

“This is not Footloose, and the city should not be telling businesses their customers can’t dance; rather they should encourage self-expression through dance and support our small businesses, while implementing proper safety protocols and policies at our local venues.”

Adams said the “Zero Carbon” amendment will help bring NYC closer to its carbon reduction by making it easier for the real estate industry to incorporate for new clean energy systems in buildings, like electric vehicle charging, solar panels, and electrification of buildings.

As part of the plan, the city will make an effort to “invest in and plan” around areas across the five boroughs with emerging job hubs and commercial sectors to promote economic growth for future generations.

“We want New Yorkers to stay here, put down roots and raise families. We want to continue welcoming immigrants and young people seeking opportunity,” Adams said, according to The City.

These sweeping changes to zoning rules would have to be approved by the City Council, with some plans requiring the city’s lengthy uniform land use review procedure. Dan Garodnick, the chair of the City Planning Commission tasked with getting the zoning initiatives through the Council, told Crain’s that zero-carbon zoning will be the priority.

Adams’ plan comes just one day after developers canceled plans for a development in Harlem with 915 units of housing (half of which would be affordable) after local Council Member Kristin Richardson Jordan came out against the project. Richardson Jordan said the new development would displace Harlem’s Black residents and contribute to gentrification.

Jim Cornette on The Richest Wrestlers Of All Time