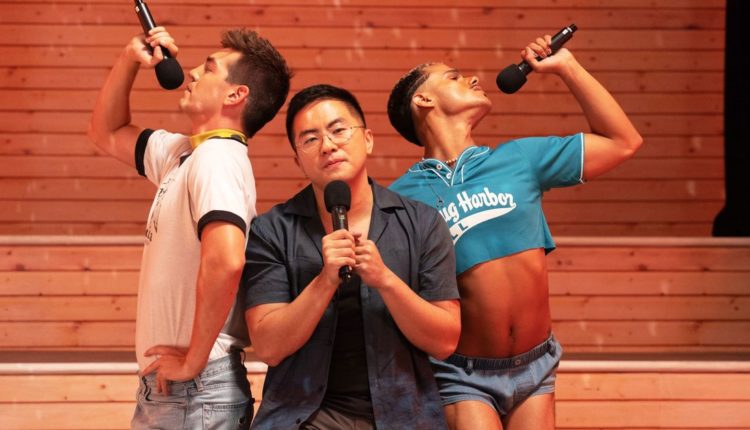 On the “queer music spectrum,” there are apparently two poles — Britney Spears and Tracy Chapman — or at least that was what Bowen Yang told Vanity Fair in a June 3 interview. When asked about the musical moment at the end of his new film Fire Island, in which his character gains confidence over the course of a karaoke performance, Yang revealed that his co-star (and writer and producer and Vulture profile subject) Joel Kim Booster let him choose what song he wanted to sing. Yang immediately wanted Britney Spears’s … Baby One More Time–era single “Sometimes” because “it has to be a song that is somewhat campy and ironic, but also so earnest and pure.” “It is a song that I’ve always loved of hers that is summer — so light and airy and about just being vulnerable and the fear that sort of gets paired along with that,” he said. His second choices? “Baby Can I Hold You,” by Tracy Chapman or the Carpenters.

Yang getting his choice led to an even greater musical moment: a MUNA cover of the same song for the Hulu film’s soundtrack. Famed purveyors of queer joy MUNA are a fierce (said in a Project Runway season-four Christian Siriano voice) choice for the Spears cover. MUNA transforms the song from a classic ’90s-style ballad into a dreamy, beat-driven, harmony-laden anthem. However, it must be said that the choice to skip the iconic ascending bridge is, while not outwardly homophobic, certainly a choice that will affect generations to come. MUNA are releasing their self-titled album on June 24, so we’ll hold out hope that the “Sometimes” bridge shows up as an interlude.