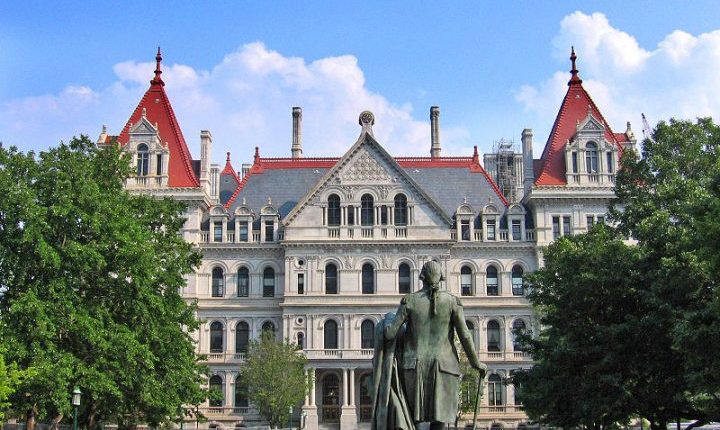 Hochul was first elected lieutenant governor in 2014. She served one term in the U.S. House from 2011 to 2013. The Democratic Party of New York endorsed Hochul at its state convention in February 2022. Her other endorsements include U.S. Sen. Kirsten Gillibrand, 12 members of the state’s U.S. House delegation, 77 members of the state legislature, and four New York City boroughs Democratic parties (Bronx, Brooklyn, Manhattan, and Queens). Public safety is a key policy of Hochul’s campaign. In response to a May 2022 shooting in Buffalo, New York, Hochul said, “New York already has some of the toughest gun laws in the country but clearly we need to make them even stronger. New Yorkers deserve to feel safe in schools, in grocery stores, in movie theaters, in shopping malls, and on our streets — and we must do everything in our power to protect them.”

Suozzi was elected to the U.S. House in 2016. New York City Councilmember Robert Holden and former councilmember Diana Reyna endorsed Suozzi. Suozzi criticized Hochul for what he called “pandering to the far left” and said his campaign was focused on “reducing taxes, making New York more affordable and cutting crime.” Suozzi also said his campaign would focus on lowering taxes. “I’ve always known that taxes are the biggest drawback in our state. Our state and local taxes are one of the highest taxes in the United States of America and it’s one of the reasons people leave to these lower tax states, like North Carolina, South Carolina, and Florida,” he said.

Williams was elected New York City Public Advocate in 2019 and served on the New York City Council from 2009 to 2019. Our Revolution, the Working Families Party, two members of the state legislature, nine members of the New York City Council, and 2021 Buffalo mayoral candidate India Walton endorsed Williams. Williams’ policy platform on his website has three pillars: housing, public safety, and healthcare. Williams said he believes that housing is a human right and the government must play a role in providing it, that public safety requires creating thriving communities, and that New York should enact a universal, single-payer healthcare system.