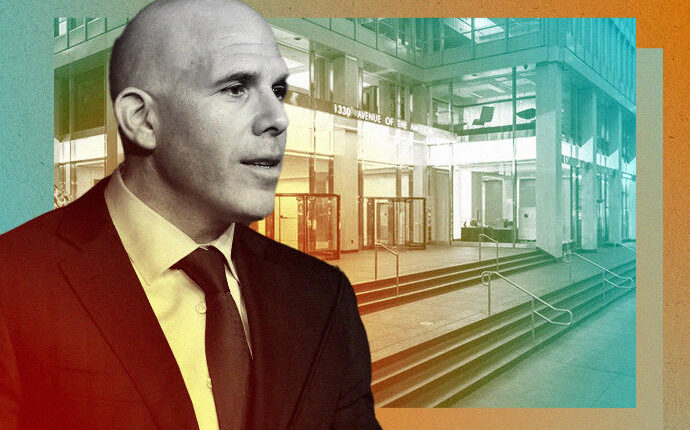 A venture between two large players in New York real estate is looking to sell a Midtown office tower.

RXR and the Blackstone Group are marketing the property at 1330 Sixth Avenue, otherwise known as 1330 Avenue of the Americas, a person with knowledge of the deal told the Commercial Observer. The joint venture is reportedly aiming to get more than $350 million in a sale of the 40-story office tower.

RXR led a group of investors to purchase the 520,000-square-foot building for about $400 million in 2010. The seller in that deal was Canadian lender Otera Capital, which took the property from veteran developer Harry Macklowe after he was forced to put it up for auction in 2009.

Blackstone joined ownership of the property previously known as the Financial Times Building in 2015 when it purchased a stake as part of a 50 percent stake deal for six RXR office properties.

The $350 million starting price tag is not only well below what RXR paid for the building more than a decade ago, but also startlingly less than the $498 million Macklowe put down to buy the property in 2006.

Tenants at the building include Silvercrest Asset Management, Knoll and the Robert Wood Johnson Foundation. Silvercrest’s initials adorn the top floor of the building, a distinction once belonging to the Financial Times.

An Eastdil Secured team including Will Silverman and Gary Phillips is marketing the property.

The building is being offered free of debt, according to the Observer. RXR previously paid off a $200 million loan from New York Community Bank with a $285 million refinancing courtesy of German lender DekaBank in 2018. The loan will likely be paid upon a sale of the building.

RXR has been seeking a significant refinancing of another one of its office properties, 5 Times Square. The firm is looking for a $1.5 billion refinancing of the 1.1 million-square-foot, 39-story tower, The Real Deal reported earlier this year.

Blackstone, meanwhile, is coming off a rare defeat in the office market, recently handing over the keys to its Midtown building at 1740 Broadway. A $308 million loan on the property was transferred to special servicing, though Blackstone was reportedly still looking at loan resolution options.

The move came only one week after the firm bought a 49 percent stake in One Manhattan West from Brookfield and the Qatari Investment Authority, which valued the 67-story office building at $2.85 billion.