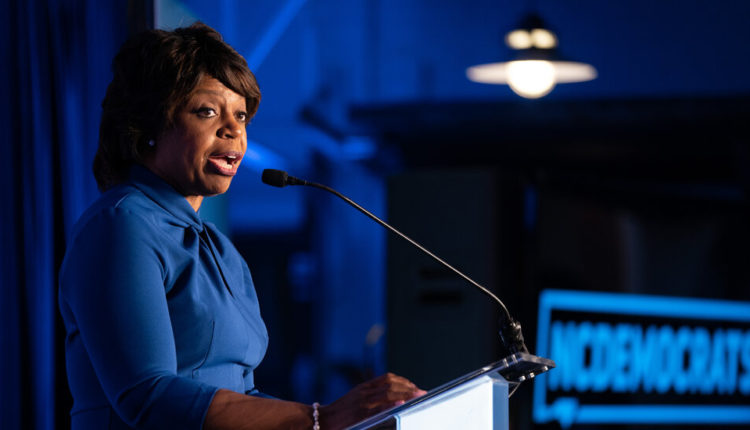 
Television stations in North Carolina made the unusual decision on Friday to take down an attack ad against Cheri Beasley, a Democratic Senate candidate, after complaints that the ad falsely accused Ms. Beasley of freeing a man convicted on charges of possessing lewd images of children when she served as chief justice of the North Carolina Supreme Court.

On Friday, five TV stations in Raleigh and Charlotte said they would pull the ad or that they had “paused” it pending an examination of its claims, according to emails from the stations to Courtney Weisman, a lawyer working for the Democratic Senatorial Campaign Committee, which were reviewed by The New York Times.

On Thursday, two Charlotte stations took the ad off the air. A representative for the stations, WXAN and WSCO, explained in an email to Ms. Weisman that the ad’s claim about Ms. Beasley “is in error, as it appears the defendant was not set free” by the State Supreme Court decision.

Chris Hartline, a spokesman for the National Republican Senatorial Committee, which made the ad, defended the claims made against Ms. Beasley and said the Charlotte stations that acted on Thursday had not asked to see any documentation before making the decision.

“Every word of the ad is true,” Mr. Hartline said in a statement. “This bizarre statement from a TV station that had yet to receive or even ask for our substantiation for the claim will be noted by our media buyers as they make future decisions about ad buys.”

“Voters know Cheri worked with law enforcement to hold violent offenders accountable, and she will continue to keep our communities safe as North Carolina’s next U.S. Senator,” Ms. MacMillan said in a statement. Ms. Beasley is running against Representative Ted Budd, the Republican nominee, in a race for an open seat that is important in determining control of the Senate.

The ad in question, titled “Failed Our Children,” ties Ms. Beasley to three cases involving child sex offenders. The attack against Ms. Beasley, who is Black, is reminiscent of attacks by Senate Republicans aimed at Judge Ketanji Brown Jackson during her Supreme Court confirmation hearings. Senators, led by Josh Hawley of Missouri, accused her of being lenient in sentencing in child pornography cases. A review by PolitiFact concluded that Judge Jackson’s sentences were consistent with those of other judges.

The case that led to removal of the North Carolina ad involved a man named James Howard Terrell Jr., who was convicted in 2016 of possessing lewd images of minors on a computer thumb drive.

An appeals court ruled that a detective had conducted an illegal search of the thumb drive, in violation of Mr. Terrell’s Fourth Amendment rights, and it sent the case back down to the trial court.

In 2019, the State Supreme Court, with Ms. Beasley in the majority, upheld that ruling. As of May 2020, Mr. Terrell was still in prison, according to court records, and it was on that basis that Ms. Weisman, the Democratic lawyer, demanded the ad be taken down. “To claim that her vote somehow resulted in a defendant being ‘set … free’ is false,” she wrote.

A lawyer for the Republican campaign arm, in a letter to TV stations about the ad, argued that North Carolina court records for Mr. Terrell state that his convictions were “vacated” after the Supreme Court heard the case. The lawyer, Ryan G. Dollar, accused the Democratic lawyer of attempting to “gaslight” TV station managers. Court records indicate that Mr. Terrell is no longer incarcerated.