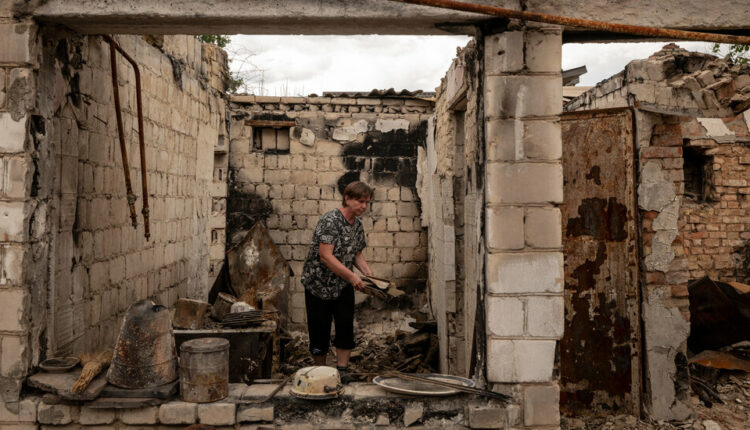 
The State Department said on Saturday that it had reviewed photos and videos appearing to show two Americans captured in Ukraine, although it declined to comment on the authenticity of the images or on the men’s conditions.

American officials were in contact with the men’s families, the Ukrainian authorities and the International Committee of the Red Cross, a State Department spokesperson said.

The Red Cross declined to comment on the case.

The men, Alex Drueke, 39, and Andy Tai Ngoc Huynh, 27, were reported missing last week by their families, and the State Department described them on Saturday as “reportedly captured by Russia’s military forces in Ukraine.” Both are U.S. military veterans who volunteered to fight in Ukraine.

The Russian government has not commented publicly on the reports.

On Friday, short videos purporting to show the two men were posted on YouTube in which they said in Russian, “I am against war.” It was unclear when the videos were recorded or by whom.

Then the Russian state broadcaster RT said it had interviewed the men, claiming they surrendered to Russian troops and were at a detention center controlled by Russian-backed forces. Videos watermarked RT, circulating on social media, showed the men, separately, speaking to someone off camera about their experiences.

Lois Drueke, the mother of Mr. Drueke, said on Saturday that she and other members of her family celebrated after seeing the first of the videos, although it was only a few seconds long.

“I have seen the ones from yesterday over and over again,” she said. “It’s wonderful to see him and see that he is alive.”

The family was confident that it was Mr. Drueke in the videos, because of his “body language, facial expressions, gestures and, most importantly, his mellifluous voice,” said Dianna Williams, his aunt. The State Department, however, has not yet told the family whether officials believe the videos are authentic.

Mr. Drueke, a former U.S. Army staff sergeant who served two tours in Iraq, had previously warned his mother that if he were ever taken captive, he could be asked to read from a script, Ms. Williams said. She added said that the family understood that everything he was saying should be taken with a grain of salt.

“After the great relief we felt at seeing the videos, we also feel apprehensive because we now know that he is in a captive situation,” she said.

“It is a comfort to hear his voice,” said the elder Ms. Black. “It’s not a situation we want him to be in, but as long as he is talking, he is breathing.”

She said the inflection and cadence of the man’s voice in the video was familiar, although they could not be sure it was Mr. Huynh.

Ms. Black said the videos reminded her of recordings of prisoners of war from Vietnam. “Everyone knows that prisoners are not free to speak their minds,” she said.

The State Department declined to comment in detail on the case, citing privacy concerns. But it repeated a warning that President Biden gave on Friday, when he told reporters, “I want to reiterate: Americans should not be going to Ukraine now.”

He said the administration did not know the location of the men.

Last week, a court in Russian-occupied eastern Ukraine sentenced three foreign fighters to death, accusing the men, from Britain and Morocco, of being mercenaries. Western nations condemned the verdict, and legal experts said the trial appeared to be calculated as a warning to foreign volunteers that, if captured, they could be denied the protections granted to prisoners of war under the Geneva Conventions.

The conventions, which govern the law of war and which Russia has signed, specify that captured volunteer fighters can also be considered prisoners of war. The primary definition of a mercenary under international law is someone fighting primarily for financial gain who is paid substantially more than local armed forces.

Why Search Engine Optimization is Important for Your Business