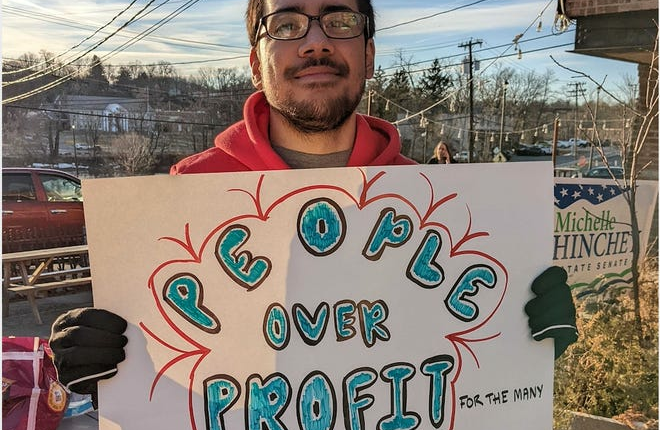 
For Daniel Atonna, access to utilities is a personal matter.

Atonna, who grew up in New York’s Hudson Valley, said his family couldn’t always afford to heat their home. On some nights, when the heat wasn’t running, he and his sister accompanied their mother to her overnight shifts at a nearby nursing home. The two would sleep in the facility’s lobby, ensuring they were able to stay warm.

“These private utilities are not up to the task,” Atonna said. “They can’t even maintain the current energy grid, let alone get us prepared for the future.”

Atonna is political coordinator of For The Many, a grassroots organization championing progressive causes across The Empire State. The first step toward a new statewide energy economy, he said, could be the Build Public Renewables Act. The legislation passed the state Senate in June, but the Assembly failed to take up a vote before the end of its latest session, leaving the bill in limbo.

The act, if signed into law, would expand the reach of the New York Power Authority, a state-owned utility that provides power to public buildings and schools. It would allow the utility to serve businesses and homes across the state, requiring an eventual transition to exclusively renewable energy sources and significant infrastructure investments.

The New York act is one of many efforts across the nation to implement publicly-owned sources of energy. Such utilities generate about 10% of the country’s electricity, according to the American Public Power Association, and supporters are looking to increase that percentage.

Activists are rallying in other states, too – including Illinois, Massachusetts and Michigan.

Organizers at municipal and state levels say the practice would eliminate the incentivization of profit that comes with privately-owned utilities, while also allowing customers to more easily hold companies accountable for their service.

Opponents, meanwhile, remain concerned about the costs of investments associated with a shift to public power, and many doubt whether such a model would fulfill its promises.

“With major projects in the works from private investors and the benefits that consumers see, there is no reason to shake that up by allowing NYPA into the fold,” Gavin Donohue, president of trade association Independent Power Producers of New York, said in a statement. “Why change up the competitive procurement process when private independent energy companies are more than willing to continue investing in New York?”

The history of US public power utilities

To trace the history of public utilities, it’s important to start with the first American power grids, created in the 1880s.

At first, electricity was a luxury afforded only to the rich through private utilities, according to Michael Menser, the director of Urban Sustainability Studies at Brooklyn College. But it didn’t take long before access expanded, with towns constructing their own grids for both private and public utilities, he said.

CLIMATE POINT:Subscribe to USA TODAY’s free weekly newsletter on climate change, the environment and the weather

Throughout the next few decades, public power grids became more widespread, with large expansions into the beginning of the 1920s. But, soon after, their fate would change as private utilities rapidly began buying up their public counterparts, Menser said.

While public grids do still exist nearly a century later – most notably in Nebraska, the only state served wholly by a consumer-owned power system – Menser told USA TODAY he’s seen a recent resurgence in the push to create more such utilities.

Though Menser identified a range of possible explanations for the shift, he described racial disparities in service and climate activism around renewable energy as primary drivers.

“When climate change intensifies, storms and fires have also increased,” Menser said . “In many cases, private utilities don’t seem to be accountable after the event. So that’s another thing that made people realize we need a much more accountable entity.”

A governor’s veto in Maine

Wil Thieme became interested in the issue of public utilities after realizing it centered two subjects he cared about: Monopoly ownership and sustainability.

Thieme, of Cumberland, Maine, learned about the push for public power in July 2021, and has since been elected as a co-chair of the Maine Public Power campaign.

Democratic Gov. Janet Mills vetoed a bill in July 2021 that would have, with voter approval, authorized the replacement of the state’s two largest electricity companies with a publicly owned utility. In her veto letter, Mills expressed concerns about the legislation’s plans for financing and regulation.

“There may be a way to create a utility with a professional governing board that is clearly eligible to issue low-interest, tax-exempt bonds that would save ratepayers money, achieve better connectivity with solar and other renewables, and further the climate goals of this Administration,” Mills wrote at the time. “But L.D. 1708, hastily drafted and hastily amended in recent weeks without robust public participation, is a patchwork of political promises rather than a methodical reformation of Maine’s complicated electrical transmission and distribution system.”

Since then, Thieme told USA TODAY that Maine Public Power has been collecting signatures in support of a statewide referendum that could overturn Mills’ veto. They’re facing strongopposition from privately owned utility companies, he said.

“They lobby aggressively against anything that could potentially hurt their profits,” Thieme said. “It’s not great when you’re trying to get real progress, so a change is going to be very helpful in terms of getting climate bills passed.”

The opposing viewpoint: Private utilities could provide the most effective path to meeting sustainability goals.

“To achieve our climate and grid modernization objectives, we need everyone working together,” John Flynn, president of statewide utility Versant Power, said in legislative testimony in May 2021. “We don’t have time or money to waste on polarizing fights.”

Marie Therese Kane, an organizer with We Power D.C., said many members of the public power movement joined looking to take drastic steps to address climate change. With a public utility company, Kane said there is a unique opportunity for direct accountability, especially in meeting climate goals, that doesn’t exist to the same extent in a privatized system.

​​”A lot of folks are disenchanted by traditional environmental organizations’ focus on individual behavior change, or incremental units – efforts that don’t account for the political reality,” Kane told USA TODAY. “The movements for public power have an opportunity in something that can attack the systemic causes of something like climate change.”

A fight ‘worth fighting’ in New York

The supporters of public power still face significant obstacles – even after sparking conversation at some statehouses.

In New York, for example, the opposition to additional public utilities starts in the organization that activists are trying to expand. Justin Driscoll, NYPA’s interim president and Democratic Gov. Kathy Hochul’s nominee to fill the permanent role, opposes the Build Public Renewables Act, much to the chagrin of organizers.

“NYPA does not believe that we have a cost advantage in developing renewable generation,” Driscoll said in a July special hearing discussing the act. “The bill’s mandates, like those directing NYPA to develop renewable energy projects and provide energy services and imposing limits on what NYPA may charge for that power, are simply unworkable.”

Still, for Atonna, the need for public utilities in New York – and the passage of the Build Public Renewables Act – remains clear.

“This is really an agency that is uniquely positioned to do some amazing things right now,” he said. “What we need to do is unleash its full potential.”

“Just because something is public doesn’t necessarily mean it’s good,” said Aaron Eisenberg, 31, another member of Public Power New York. “But the fight for a democratically accountable public institution and utility? That’s worth fighting for.”