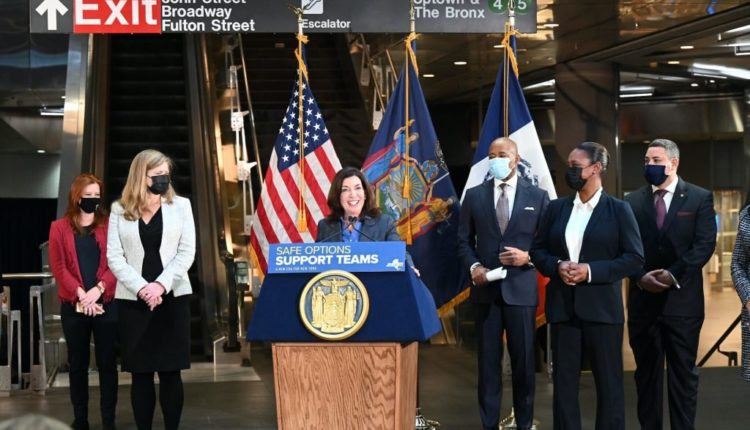 Commuters will soon see more New York City police officers riding the subway, Gov. Kathy Hochul and Mayor Eric Adams announced Thursday. Hochul and Adams on Thursday laid out a new initiative to tackle homelessness by deploying teams of specially trained Safe Options Support officials. These “SOS” teams will consist of mental health professionals who will work with the city’s outreach teams to assist homeless New Yorkers. To combat crime in the subway system, Adams has ordered the mobilization of more officers who will patrol stations and board trains to make visual inspections.

To further combat homelessness, Hochul announced the development of 100,000 new supportive housing units in addition to the 100,000 affordable housing units she spoke of earlier this week in her 2022 State of the State address. The state and its new SOS teams will try to focus on the most vulnerable populations, including young runaways, LGBTQ youth, and the formerly incarcerated. These teams will work to connect with these groups and direct them towards getting help in the form of housing and other essential services.

“For the first time we’re going to create teams of trained professionals who will be embedded here, who develop relationships, develop trust, and allow us to face the issue of chronic street homelessness with a plan,” Hochul said. “We’re going to get them the support they need, get them into shelter and ultimately into housing.”

Another major part of the governor’s initiative aims to tackle crime in the NYC subway system. Since the beginning of the pandemic, high-profile crimes on the subway have frequented news headlines, putting fear in the minds of New Yorkers. As reported by the New York Times, “the total number of felony assaults was higher in 2021 than in 2019 despite the drop in ridership.”

However, it is important to note that while there have been a number of shocking incidents on the train, overall crime is down. According to NY1, “overall crime in the subway is flat compared with 2020” and is “down by almost 30% compared with 2019 and 2018.” Adams believes an increased presence of officers in stations and on train cars themselves will help New Yorkers regain trust in their subway system.

“When you walk through that train and the public sees you,” Adams said, referring to officers on the subway, “they feel that level of confidence that the system is a safe place to be. Subway riders will see our officers on that patrol and ready to respond if needed.”

While state and city officials believe the additional presence of officers on the subway will reduce crime, many others believe the allocation of resources required for their deployment is misplaced. As 6sqft previously reported, when the MTA released its 2020 budget plan, one proposition that caught the eye of many New Yorkers was a 20 percent increase in police presence to fight fare evasion, costing a hefty $249 million.

Instead of spending millions on combating petty crime, critics of the plan encouraged the city to invest their resources in fighting assaults against riders and transit workers, as well as service improvements to the regularly faulty system.

Homeless advocate groups like the Coalition for the Homeless say that the sudden increase of police in the subway system will further marginalize the homeless.

“While greater City-State collaboration and mental health resources could be helpful, we are concerned that surging police officers into the transit system will further criminalize homelessness and push people away from services and housing,” the coalition said in a statement.

However, Adams ensures officers will not get involved unless there is a clear necessity.”We will not allow our police officers to have unnecessary engagement with the homeless individuals and those petty issues that will cause a negative encounter with our police officers and the riders of the public,” Adams said.

Critics also referenced the historical tendency of law enforcement to single-out people of color in their policing. There have been instances of law enforcement using excessive force against subway riders, and many fear that an increased police presence will only cause more of these events to occur.