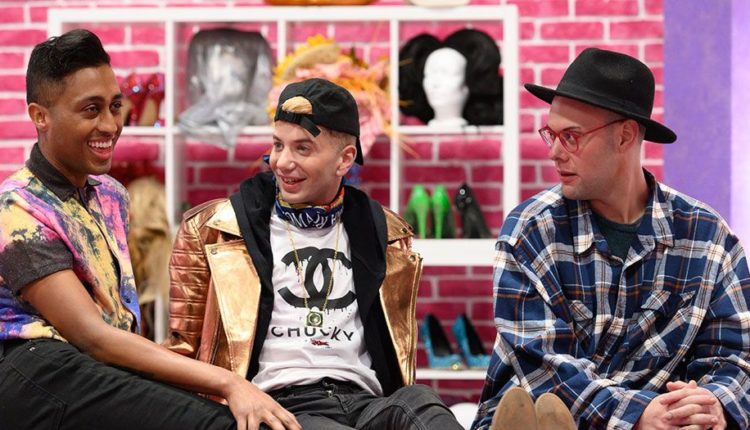 In 2013, Alice Munro was the first-ever Canadian to be awarded the Nobel Prize in Literature.

This was a mistake.

Not because Munro didn’t deserve it but because she shouldn’t have been the first. A literary Nobel should have already been awarded to Celine Dion for “It’s All Coming Back to Me Now,” which I have reason to believe is the most beautiful song ever made. It is elemental and passionate and excessive and operatic. It is camp, but it is dead serious. It is the flesh and the fantasy. It casts a spell on the frostbitten ears of queer Canadians. When it plays, I feel the way I imagine Nascar audiences feel saluting the flag and singing “The Star-Spangled Banner.” It’s enough to make you believe in a Quebec libre.

But when Brooke Lynn Hytes says this season’s last challenge will be the three final queens lip-syncing to “It’s All Coming Back to Me Now,” my excitement is guarded because the previous lip-sync showdown was kind of underwhelming. Last week’s penultimate episode was a surprise reunion with the eliminated queens returning for a Brad Goreski–moderated catwalk down memory lane. The returning queens looked beautiful and Suki Doll won Miss Congeniality, but not a single interesting word was spilled. The reunion culminated in a four-way lip-sync showdown to the finale. The queens drew lipsticks and paired off to RuPaul songs — All Stars 4 it was not. We finally got to see Pythia lip-sync, but “Call Me Mother” was not an ideal pairing of artist and material. What, Ru hasn’t done any Bjork covers? The highlight was Icesis Couture pounding her puss to “Born Naked,” and I know I’m Ru-pilled because I just kept thinking, This is a great song. By the end of the showdown, Gia was eliminated and the final three were decided: Kendall Gender, Icesis, and Pythia.

I’ll admit I underestimated Kendall for most of the season. Despite having name recognition vis-à-vis my Canadian friends, I found her to be a very spotty member of the very spotty Brat Pack trio. But she must have some charisma that really sparks when you see her live. Icesis has had a winner’s edit since day one, and her often hilarious talking heads helped make her ride to the top fun. And Pythia might have the best track record of the three, serving some of the best looks in Drag Race herstory (two-headed, centaur) and having never landed in the bottom — a point she makes known when she wipes the lipstick off the mirror and says it’s her first time having to do it. At the start of the episode, the scales feel tipped to Icesis, but Pythia could win it all.

RuPaul gives a video message to the final three, but she notably says their names in voice-over, unable to be bothered to get into hair and makeup to acknowledge her Canadian stepchildren. Brooke reveals that the maxi challenge will be another verse-writing, choreo-heavy musical challenge, and you have to wonder just how many lyrics these gals have left in them. We can’t all be Sondheim.

For the mini-challenge, they all try to summon the ghost of Tic Tac lunches past in one-on-one convos with season-one winner Priyanka, followed by photoshoots in which the contestants get to “direct” Pri like she’s some kind of piece of meat or pit crew. Kendall and Pri know each other, and when Kendall tells her she won the roast, Priyanka balks. “You’re comedy queen? You’re not funny!” Not every season is blessed with a Jimbo.

Back in the werkroom, the girls write their lyrics. “Last time I did a singing challenge, it didn’t go so well for me. Not exactly top of the charts,” says KG. “Not even bottom of the charts,” says Icesis, shady boots. They record their verses with Brooke and lay down choreo with Hollywood Jade. Icesis is worried about her grandma’s knees, but she soon proves she’s got nothing to worry about. She’s got grandma’s knees like Nancy Reagan. Meanwhile, Pythia doesn’t understand the way Hollywood Jade moves. “He’s a lizard person, I know it,” she says, gliding seamlessly into the QAnon influencer space.

None of this will prepare you for the final number, which is probably the best thing to happen this season. They go in a Game of Thrones direction with the whole “Queen of the North” motif, meaning they’re all wearing fur capes and wielding swords! Most Drag Race challenges would be improved by simply letting the queens have swords. The song is a thumping electronic number, just a total assault on the senses, and it rules. Icesis gives the single best verse since Bimini’s “U.K. Hun?” rap, crawling downstage like a gay demon, cackling, “Did hell just freeze over? Because the new ice queen has arrived. The new! Queen of! The north! Brrrrrrrap!” Her energy is ecstatic. Her flow is aggressive. The others do a good job, too, building to the highlight of the number: a bridge that plays back all of Brooke’s exit lines to the eliminated shequeens. The message is clear as ice: These are the last three standing, and they’re showing you why. The main takeaway here is the higher the bpm, the better a finale song.

Brooke Lynn’s grand-finale look is literally identical in color scheme to a Neopet I had once, but we’re here to talk about the queens. Icesis stuns in a signature bald look, regal white lace, and a headpiece attached to a mouthpiece that makes me wonder what kinky dental checkup role-play she and her nurse boyfriend get up to. Kendall’s look is, unfortunately, a boot for me. The hair is stunning and her smile radiant as always, but her nude dress is baggy and ill-fitting, and her “powerful hourglass shape” oversize padding, while smart and meaningful in context, is literally misshapen and reads as “lumpy.” Best of all, unsurprisingly, is Pythia, dressed as a living Grecian column. A damn column. She looks like the Muses in the “I Won’t Say (I’m in Love)” number from Hercules, which, if you know, you respect it. Pythia has more Greek pride than the dad from My Big Fat Greek Wedding, which, for the record, is a Canadian co-production. She’s my favorite Greek character on TV this side of Stath Lets Flats.

Instead of talking to baby photos of themselves — a controversial Drag Race practice — they talk to the photos they took with Priyanka like the day before. They still manage to make it weepy, though. All three queens talk about life struggles from addiction to self-harm to growing up in a religious family. Icesis goes first and claps for herself when she’s done, and honestly, that’s the spirit. The kicker comes when Brooke pulls up an old photo of Brad Goreski in drag and says, “Bradley, what would you say to young Alexa Diamond?” I screamed.

The rest of the queens from the season return, and between this, the reunion episode, and the elimination line bridge from “Queen of the North,” I respect how much Canada’s Drag Race is making space in the finale for its entire cast. Plus it means we get some fabulous looks from Stephanie Prince and Kimora Amour and a hilarious and unique one from Océane Aqua-Black.

And then it’s time for the lip-sync. Kendall says “Yes!” knowing a lip-sync is a shot at overcoming her track record and possibly still winning the competition. But her energy is all wrong for “It’s All Coming Back to Me Now,” going too camp and making wacky expressions. Pythia stands still as a pillar so that when she finally moves, it’s dramatic and effective like one of those human statues in the park. Pythia is a vision, and Kendall is committed, but the camera stays close on Icesis, who sells all the drama and the heartbreak with her face, exaggerated false lashes cast to the ground like mournful spiders. And when the pre-chorus beat comes in, they all start milling in different directions across the stage, hitting their marks like they planned it. When the song ends, Pythia bursts into tears because of the effect Celine has on les Canadiens francophones. It’s involuntary.

Priyanka emerges with crown and scepter and reminds us why she’s a winner, looking like a Hindu deity with extra arms that pop up with the pull of a lever. Icesis is crowned the winner. If her challenge wins didn’t seal it, her final challenge verse did. And if her challenge verse didn’t, her lip-sync did. Icesis Couture is a deserving winner, while KG had a satisfying arc and arty queen Pythia will now and forever have cemented her place as a fan favorite. Priyanka leans over to give Icesis a many-armed hug, and so ends another season on the scrappiest little Drag Race offshoot that could. They nailed the landing. Let them keep the swords.

• “She said Athens is burning.” — Kendall, re Pythia’s voguing.

• “Did I win? Did I win again?” — Priyanka emerging to give the crown over.

Rockettes Cancel Rest of 2021 Christmas Shows Due to COVID

‘The Witcher’ Season Two, Episode Five Recap: Turn Your Back

Are the Harry Potter Movies on HBO Max or Peacock Right Now?

Post-Trump ‘SNL’ soars and other commentary