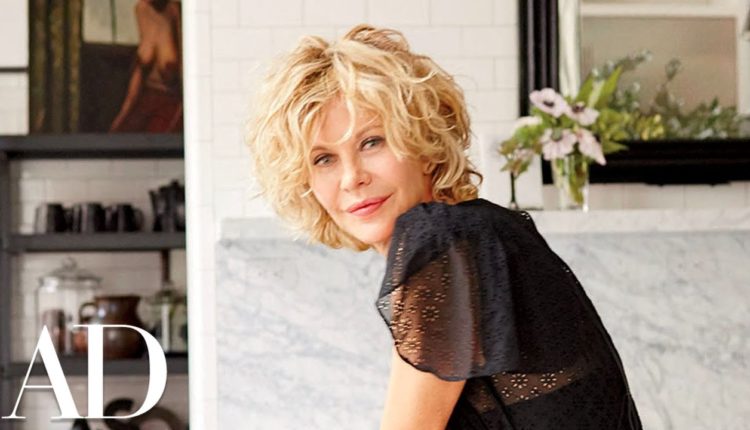 Ryan first encountered the loft apartment she now calls home around 15 years ago, when she attended a party there. She forgot all about it until she was on her house hunt and stepped back through the door. “I remembered immediately having been there. It was all quite different back then, and the space had been through many eras. At one point Cindy Sherman had used it for her photo studio. In fact, what’s now my coatroom was her darkroom. But even when I had visited all those years ago, I was amazed by the volume. It was like so much of New York: cinematic.”

— Two prints from Ryan’s photography collection—one by Sebastião Salgado (top), one by Annie Leibovitz—are displayed on the room’s marble shelving.

— Light floods the living room, where a pair of task lamps from Wyeth sit atop a vintage worktable, one of Ryan’s treasured finds. The armchair at right, also from her trove, is joined by a Stéphane Parmentier lava-stone stool.

— A tub by the Water Monopoly anchors the master bath; the dual Urban Archaeology vanities are customized with Grigio Carnico marble tops. Tub and sink fittings by Waterworks.

— In a corner of the living room, a painting of Ryan by John Mellencamp overlooks an Arts and Crafts table displaying a Pablo Avilla wire sculpture.

— The media room features a bronze-footed sofa by BDDW and a grouping of Scandinavian pottery from Wyeth.

— Bed curtains of a Holland & Sherry wool and a pendant light from Olde Good Things hang in the master bedroom. Arts and Crafts chairs by George Henry Walton, cocktail table by Jacques Adnet, rug by RH.

— Industrial lights from a salvage shop in Maine illuminate the kitchen’s dining area, which boasts cabinets by Fine Woodwork. Grapefruit fills a porcelain bowl by Valérie Hermans on a plank-top table by Get Back.