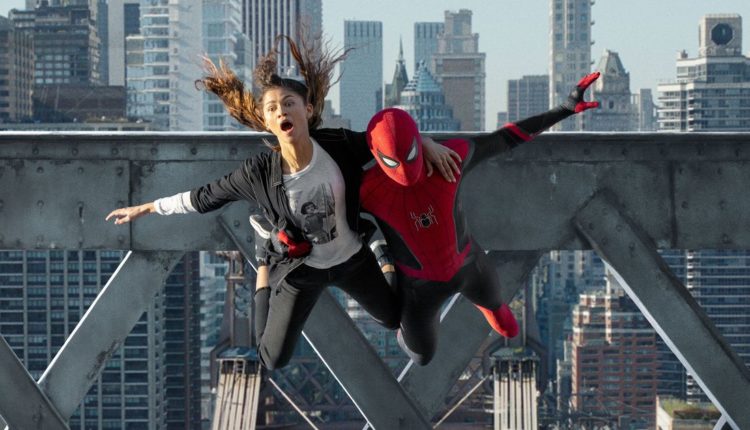 If there’s any Marvel franchise that’s bound to get an audience’s you-know-what-senses tingling when it comes to Easter eggs, it’s Spider-Man. Given the popularity of the character and audiences’ familiarity with his world, be it through comics, films, TV, or video games, it’s pretty difficult to catch fans off guard with references to Spider-Man’s larger mythology. And with Spider-Man: No Way Home, the references are threefold as three generations of Spider-Men come together for an epic Marvel team-up after a spell gone wrong breaches the multiverse. The return of a number of familiar faces from the past 20 years of Spider-Man movies offers the chance to catch plenty of references to past films, comic book history, and Spider-Man’s future … just like flies. Thwip!

The MCU’s MJ (Zendaya) has the distinction of being named not Mary Jane but Michelle Jones, which has always been something of a sticking point among fans concerned that might mean Mary Jane Watson didn’t exist or would be introduced later, complicating things. But No Way Home consciously addresses that, revealing that MJ’s full-name is Michelle Jones-Watson. The character tells the feds that she doesn’t go by Watson, suggesting a troubled relationship with her father, similar to her Raimiverse counterpart played by Kirsten Dunst. While the name reveal doesn’t impact her character, it is a fun nod that confirms she is indeed this universe’s one true MJ.

The formally Stark-funded agency Damage Control shows up to interrogate Peter (Tom Holland) and his friends, which is ultimately what gets them pinned as accomplices in the death of Mysterio, leading Spidey to seek out Doctor Strange. This is something of a full-circle moment, as Damage Control’s presence after the Battle of New York cost Adrian Toomes (Michael Keaton) and his crew their jobs, leading to him becoming Peter’s first Big Bad, the Vulture in Spider-Man: Homecoming (2017).

After Peter’s identity is revealed to the world, he’s told to lawyer up, and Happy Hogan (Jon Favreau) gets him the best lawyer in New York City: Matt Murdock. Charlie Cox reprises his role from Netflix’s Daredevil, and along with Vincent D’Onofrio’s Kingpin showing up in Hawkeye, it looks like Marvel Television’s Netflix characters will finally be folded into the MCU proper. There’s also a bit of fun to be had in the fact that in the Ben Affleck-starring Daredevil (2003), Favreau played Murdock’s best friend, Foggy Nelson, which helped land him the directing gig for Iron Man (2008), effectively launching the MCU.

Murdock’s appearance and the brief display of his skills isn’t just an affirming moment for fans of the canceled series. It also establishes the beginnings of a relationship between Spider-Man and Daredevil, one of Marvel Comics’ oldest and most popular friendships, going back to Amazing Spider-Man No. 16 (1964). The two have not only consoled each other in times of hardship but have even shared villains like the Kingpin, Mysterio, Owl, Tombstone, and Electro, given their proximity to each other in NYC. With Murdock also rumored to appear in the upcoming She-Hulk series on Disney+ we can only hope it won’t be long before we see him suit up and team-up with Spider-Man.

Peter’s decision to go to Doctor Strange for aid in No Way Home borrows from the controversial Spider-Man storylines One More Day and One Moment in Time, in which aspects of Peter’s history (like his marriage to MJ and the death of Harry Osborn) are erased so Peter can save his dying Aunt May. While Strange cannot save Aunt May and Peter resorts to a secret deal with Mephisto, Strange does perform a spell so that everyone will forget Peter Parker is Spider-Man (and at the last minute, Peter alters the spell so that Mary Jane will remember). No Way Home goes all in with the repercussions of such an alteration — though it ends with a different, though earned, outcome in Peter’s life.

Since returning after the Blip, May Parker (Marisa Tomei) has made it her mission to help those left displaced and homeless after half the population returned from non-existence. We saw those who returned struggle to find shelter and medicine during The Falcon and the Winter Soldier, which is set shortly after the events of No Way Home. But it’s good to know that there are ordinary citizens doing what they can to help. F.E.A.S.T., an acronym for Food, Emergency Aid, Shelter and Training has become central to May’s service work in the comics, beginning in 2008, and it was also featured in the 2018 PlayStation game, Spider-Man, making it increasingly important to the Parker legacy. In the comics and PlayStation game, F.E.A.S.T. was a front for a criminal empire led by Martin Li, a.k.a. Mister Negative, before he was defeated and May restored the organization’s name within the community. While there is no reference to Martin Li in No Way Home, he could seize the opportunity to take over F.E.A.S.T. in the aftermath of May’s death, leading him to come to blows with Spider-Man.

There’s a bit of a flirty moment between May and Otto Octavius (Alfred Molina) in Happy’s apartment before everything falls apart. It’s brief and likely meaningless, except to those who know the history between May and Otto: in The Amazing Spider-Man No. 131 (1974), they dated for a time and were almost married. It’s a consummation no one really wants to think about, but one referenced just as recently as last week’s comics issue Amazing Spider-Man No. 80.BEY, in which May and Ock team up to save Peter’s life and exchange some uncomfortably suggestive dialogue.

Ned (Jacob Batalon) is finally given a last name in No Way Home, and it’s just as many expected: Leeds. In the comics, Ned Leeds has an interesting history as the husband of Betty Brandt and a journalist at the Daily Bugle who is a work friend of Peter’s. First introduced in Amazing Spider-Man No. 18 (1964), he also happens to be one of the many men to adopt the guise of the Hobgoblin, using Norman Osborn’s abandoned technology and costume. But Leeds was never the real Hobgoblin, merely a brainwashed fall guy for the real villain, Roderick Kingsley, who took back the mantle after Leeds was murdered.

So, is a similar fate in store for the MCU’s version of Ned? Both Variants of Peter Parker (Tobey Maguire and Andrew Garfield) revealed their troubled histories with their best friends, Harry Osborn, who tried to kill them. With Ned’s memory of Peter Parker gone, there’s no telling who he is without that relationship. There are several nods to a potential Goblin transformation in the ancestral blades displayed on the wall in his home, the sewing machine with green cloth being stitched, and the fact that Ned displays a limited use of magic, something said to run in his family. If Ned does Goblin up, it would be nice to see a reversal of the antagonistic relationship between Peter and his best friend that we’ve seen play out in the previous two franchises. It would be more interesting to see him as a good guy like Phil Urich, who began as a heroic incarnation of the Green Goblin. But of course, maybe the Easter eggs aren’t meant to grow into anything more, and Ned is able to simply become a successful scientist at MIT.

In this week’s episode of Hawkeye, Kate Bishop (Hailee Steinfeld) tells Yelena Belova (Florence Pugh) she should check out the “new and improved Statue of Liberty,” a nice bit of synergetic planning as No Way Home reveals a new Statue, complete with Captain America’s shield. Though given the destructive events of the final battle in No Way Home and the fact that Hawkeye takes place about a year later (perhaps during the same Christmas time as the epilogue of No Way Home) that should be the “newly improved and rebuilt again Statue of Liberty.” And speaking of Hawkeye, a poster for Rogers: The Musical can be seen during Spidey’s opening swing with MJ.

While it’s not a major plot development, when Electro (Jamie Foxx) shows up powered by an arc reactor for the final battle, the lightning bolts around his head are in the shape of Electro’s classic comic book mask, which he wore in his debut in The Amazing Spider-Man No. 9 (1964).

Electro tells Peter Parker (Andrew Garfield) he always imagined that Spider-Man would be Black, before saying that somewhere out there in the multiverse there must be a Black Spider-Man. As MCU fans know, Miles Morales has already been indirectly established thanks to a cameo by his uncle, Aaron Davis (Donald Glover) in Spider-Man: Homecoming. With Tom Holland expressing enthusiasm for a Spider-Man of color, fingers crossed that we’ll meet Miles Morales soon. And when we do, hopefully the film takes a page from the current comics run and PlayStation game, in which Peter and Miles both serve as Spider-Man in a mentor-protégé relationship.

When the box housing Peter’s corrupted spell is broken by Norman Osborn (Willem Dafoe), the shadows of villains from across the multiverse who know Spider-Man is Peter Parker begin to appear. Some of them are difficult to make out. But one figure, holding a spear, clearly seems to be Kraven the Hunter. Kraven is set to debut in his own film as part of Sony’s Universe of Marvel Characters, with Aaron Taylor-Johnson in the role. Before it was known whether No Way Home would be able to sign on all its returning faces, Kraven was pegged to be the lead villain. While the direction No Way Home took was clearly the right choice, we hope to see Kraven face off against Spider-Man eventually — that is, if the character doesn’t have his hands tied with a certain symbiote.

No Way Home’s mid-credits scene follows up on the post-credits scene of Venom: Let There Be Carnage, in which Eddie Brock and his symbiote, Venom (Tom Hardy) are transported to the MCU. Rather than battling against Spider-Man, Eddie spends his days in Mexico, learning about the history of this world from Iron Man to Thanos, before being transported suddenly back to his own world. So! It doesn’t appear Holland and Hardy will face off any time soon. But audiences who feel let down should find solace in the fact that a piece of the Venom symbiote gets left behind, which could easily lead to the MCU’s very own symbiote Spider-Man storyline. Hardy’s Venom franchise is free to continue doing its own thing, while the MCU now has access to different iterations of those characters, thanks to the multiverse. Spider-Man is going to keep on swinging and we’ll be eagerly waiting to see what’s next!