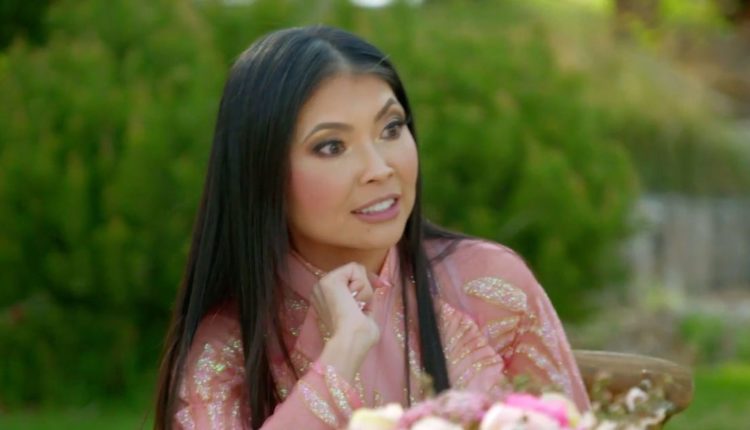 I think this television program has fully annihilated my dopamine receptors. Sure, it could be the collective doom we’re all wading through, but I’d rather blame Andy Cohen for turning my brain into a shriveled little nubbin barely able to feel joy. I’m chasing the dragon, forever looking for the high of those early season bus moments. So even some Mormon defector goss, more cult leader allegations, and what would be a wild luncheon by the standards of most other franchises end up feeling flat. And that’s before even considering the Jen Shah of it all (which, at this point, I feel kind of numb to?). It never ceases to amaze me how quickly the human brain adapts to the stimuli of new environments!

In other new news, we open at Meredith’s house, where Brooks is gearing up to stay up all night drawing a piece of BROOKSMARKS masking tape on a blazer. Meredith is hosting a nice easy girls’ night where the dress code is “blazers.” The entire Marks household becomes less human and more sentient tailoring with each passing hour. Lisa clomps in and is relieved Meredith “has food, so we’re not gonna be anorexic,” and I know my degree is from Detective Procedural University, but I’m still pretty sure that is not how eating disorders work. Jennie also arrives so they can rehash the sister wife’s situation, which I’m increasingly convinced is entirely fake. If only because the gals’ reaction to Duy being a sloppy turd is to slurp down some spiked cucumber juice and play dress up in Meredith’s sex closet. We all have our means of coping, I guess.

Two days later, Jen is driving herself to go meet Lisa for lunch. (P.S. — where is Stu in this timeline? I need more information about how he dealt with the immediate Shahhrest fallout before flipping to the feds.) You may have missed it if you too were distracted by Jen’s Totally Hair Barbie confessional look, but she explains that she and Lisa talked on the phone for an average of 3.2 hours a day before the arrest. That is the same run time as Schindler’s List. EVERY. DAY. How do these women find the time in between running real and/or fraudulent businesses?

They order crispy chicken skins to kick-off a throwdown of Bravo’s top-seeded dry-eyed criers. Lisa tells Jen she believes she’s innocent. Jen tells Lisa her feelings are hurt because Lisa didn’t show up for her. Lisa tells Jen her feelings were hurt because of that Fresh Wolf thing (yes, that conversation was elaborate product placement, and yes, I’m falling for it yet again because it’s exhausting to rehash). Jen tells Lisa she doesn’t care about anything and is just trying to fight for her freedom and life. Absolutely not. If Ms. Shah only cared about “fighting for her freedom,” she would have listened to some legal advice and shut down her Bravo contract during this investigation instead of starting a fake feud because she wanted Lisa to be her number one friend instead of Heather.

Speaking of Heather, we continue our TLC miniseries tucked in a cute little pocket of the Bravo cinematic universe. Her brother Tyler is visiting from Switzerland, where he’s been raising his kids for the last 15 years. In an ultimate power move, he sent Heather a letter “for gravitas” to let her know he was inspired by her Googling or whatever and also decided to leave Mormonism even though he was previously doing Zoom church for three hours a day in German. I guess the gravitas didn’t do shit, though, because Heather left him on read. She says it was because she felt bad for affecting anyone’s faith, which is her biggest fear. This is an awesome “biggest fear,” at least according to me, a nonbeliever whose biggest fears are open water, throwing up, and throwing up underwater. Also, like death and mental deterioration or whatever.

I swear I didn’t tailor my greatest fears to neatly segue into Lisa and Whitney’s deep spring yoga adventure. All signs point to Lisa and Whitney both knowing some serious shit about Cosby & Cronies. They’re both cagey and measured about Mary in a way that they are not about any other nugget of goss. All signs also point to Lisa indeed being someone who never works out. I was a naysayer before, but showing up to yoga in a frilly top and jean shorts that immediately became a hot heavy denim diaper is all the evidence we need. Case closed.

Jen continues her sympathy tour by explaining how she’s grateful to be going through the most difficult time in her entire life during Ramadan. She also tells Coach that she’s worried about downsizing to a smaller chalet because their home is a hub and she also employs the vast majority of her family, upwards of $50k per month. Before you judge this, please remember that nepotism is coursing through the veins of damn near every Housewives franchise. As we speak! With gusto!

At last, it’s time for the international peace gardens luncheon. Meredith is immediately sour when Jen shows up because “did. we. NOT. have thissss. converSATION not. to. inviTTE me if you invited. her?!” I mean, enunciate all you want, baby girl, but y’all are filming a television program where people want to show up to shoot day and collect that check. The gals are all doing their best fake nice until Clueless-cosplaying Whitney opens a can of worms. Make that a can of snakes, pepper spray, and whatever pheromone makes my cat get the evil zoomies. Everyone’s screaming. Mostly about who was talking the most shit behind Jen’s back.

Mary takes this opportunity to perform her own inquisition into Jen’s charges because “she cares” and “doesn’t judge,” then ends up laying into Lisa for “not being self-aware of her behavior.” Really wild allegations coming from someone who showed up late only to tell Jennie she loves her slanted eyes and yellow-toned skin! The audacity never ceases to amaze me.

Then it’s musical chairs until everyone but Heather, Whitney, and Jennie have a chance to perform a dramatique storm-off. My brain turned into curdled goo sometime around Jen and Lisa fighting over who had more PTSD from the arrest day, but I snapped back just as Meredith came in with the “TRAUMATIZED MY FAMILY FOR TWO YEARS I’M NOT INTERESTED GOODBYE.” Was it because she had something new to say here? Absolutely not! Rather, it’s because I finally placed her vocal flair as an uncanny match to Gene Wilder in the 1971 adaptation of Willy Wonka and the Chocolate Factory — specifically the “You lose! Good day sir!” scene. I will sleep tonight unencumbered.

Eventually, everyone sits back down to listen to Jen assert her innocence and Heather assert that if there’s anyone who’s there for Jen, it’s the women at that table. Just kidding!! Per my detective work, there appears to be a continuity error — the servers are putting down fresh bowls of pho as the ladies are making up while there are empty bowls of pho as everyone is stomping from the table. So unless everyone ordered seconds, it looks like the luncheon most likely did not end with some kind of tidy kumbaya. 😈

See ya next week to watch Jen ask her mom to liquidate that 401k in the pursuit of freedom! In the meantime, a discussion question for the class: Which activity would you rather do every single day for 3.2 hours? 1. Watch Schindler’s List, 2. Talk on the phone to Lisa Barlow, 3. Attend German Zoom church in temple garments? Much to think about.