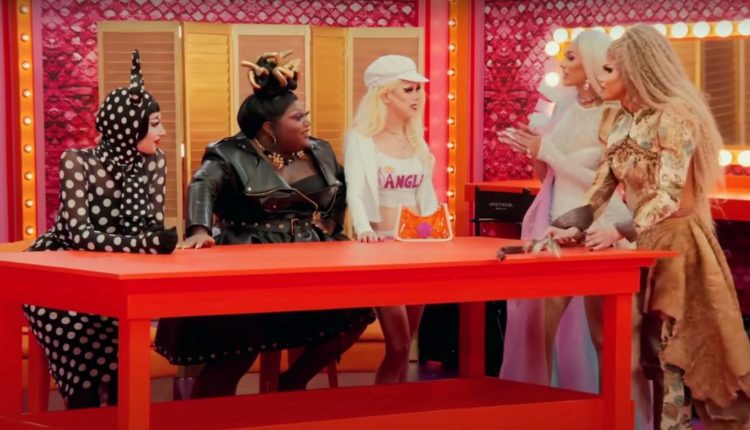 
Welcome back, besties! The year? 2022. The season? 14. The powered? By CashApp. As I’m sure you are all well aware, we continue to find ourselves mired in the throes of a global pandemic (Drag Race franchising) that has destroyed millions of lives (gays without Paramount+ logins), affected countless industries (Friday night happy hours), and spawned deadly variants (Drag Race Down Under) that have left the world confused, panicked, and traumatized. In the face of such turmoil, with hope and wariness, we now turn to season 14, which stands in the looming presence of several questions: can this season and the new crop of girls persevere in the face of Drag Race fatigue? Can the keystone of this franchise remain fresh and innovative despite the global proliferation of the Drag Race IP? Do our current vaccines protect against it? We begin to answer all these questions and more in part one of season 14’s Big Opening. Let’s dive in.

Alyssa Hunter
As soon as Alyssa Hunter walks in, I say, “Thank GOD.” After a six-season long drought, Drag Race is finally blessed with another Puerto Rican queen. Alyssa has some big heels to fill, but she seems more than up to the task. In her own words, she won “the four most important pageants” PR has to offer, and now she’s here to take one more crown. There’s much to appreciate off the bat with Alyssa. Here are my favorite things she did this episode in ascending order: She called Willow Pill ugly (iconic); she stated her talent to be guitar playing, then fake strummed an electric guitar out of sync with the song’s guitar solo (more iconic); and she’s VERY hot (most iconic). Honorable mention: bookending every joke she makes with the phrase “just kidding!!” It’s charming to me. So earnest! I think I’m going to start doing that. (Just kidding!!) Unfortunately for Alyssa, the judges don’t see her merits as clearly as I do. Not only were they turned off by her fake guitar solo, but they also make sure to tell her, “We don’t know who you are!” Well, it’s been one episode, so like … relax. Alyssa escapes the bottom two this week, but it’s a not so solid start for the Island Gyal.

Bosco
Next in is Bosco, hailing from Seattle. Yet another damp climate that has spawned several certified drag legends. On a scale of Jinkx to Magnolia Crawford, it seems like Bosco might fall somewhere on the higher end of the spectrum. Her entrance look is good, her entrance line is better (“Let’s get out there today and … make a difference.”) This (sorry the) skanky, alternative girl from Seattle is off to a good start! But when Bosco says that she’ll be doing burlesque for the talent show, I suppress a sigh. While I appreciate burlesque as an art form, in my humble opinion it’s become a default performance skill for a certain genre of drag queen. If we’re going to call out the musical theater girls for weaponizing their BFAs, we have to critique the burlesque girlies for weaponizing their MFAs. However, I’m happy to be proven (mostly) wrong as I quite enjoy Bosco’s rose petal-themed burlesque act, which culminates in a lovely bit of whimsy at the end. A mini-rose sticking out of your butthole? How delightfully camp. The judges enjoy Bosco, and Lizzo goes so far as to call her a comedic genius. Well … I don’t know about all that, but I’m pleased to see that Bosco will be sticking around.

Kornbread
It feels insane to say without even seeing the seven other queens of the season, but … winner vibes! Kornbread sweeps this episode from top to bottom in a way that reflects not just talent and sparkling personality but rigorous preparation. A fully-mixed and produced rap single before the season even filmed? When did she even find the time? Kornbread has far and away the most complete and polished package of any queen we’ve seen so far, and a dominant premiere performance that will go down in history. I ended up watching her rap performance over and over again; one line, in particular, won’t leave my head: “I didn’t come to clown for the crown / put my bread in the bag before I pull my mask down / booking fee 100k, next city next town.” Well, folx, I’m a certified Kornbread Stan. Kernels UP Breadheads!

Willow Pill
I’m obsessed with Willow Pill. Like to the degree that RuPaul is obsessed with Willow Pill. Willow Pill is the Tommy Girl baby tee I never had. She is the bimbo everybody would want. She is the Nicole Paige Brooks that everybody deserves. I don’t know a better person. Willow walks into the werkroom in 2001 Paris Hilton-core. She sports platform flip flops, a mini skirt, a baby tee (Angles with a halo above the A!!!), a sensible zipped up hoodie (it gets chilly in there!!!), and a handbag. Alyssa Hunter and Kornbread are distinctly not on board, but Willow seems largely unphased. For her talent, Willow pantomimes a bizarre self-care routine that culminates in bathing with a plugged-in toaster. RuPaul emphatically “gets it” and lavishes Willow with the elusive praise saved for a Gottmik, a Tyra Sanchez, or a Crystal Methyd. We have another frontrunner(?)!

Kerri Colby
As soon as Kerri Colby enters the werkroom, I become aware of two truths: One, this is the most beautiful human being I’ve ever seen, and two, this is what Kimora Blac thinks she looks like. It was a humbling experience watching Kerri remove her makeup, sit in sweats in the werkroom in bad lighting and then think to myself “hmm … that’s better than I’ve ever looked in my life.” Love that for her! Beauty aside, Kerri is notably related to Miss Continental winner and drag legend Sasha Colby. A dynasty! She also shares a strong bond with her L.A. sisters Kornbread and June Jambalaya. An axis of West Coast power that should have the other girls quaking in their pleaser boots. Beyond all that, Kerri is charming, funny, and (as we learn from the talent show) a professional-level jump roper. The judges have some reasonable notes for Kerri, but overall it’s nothing but praise for the goddess they see in front of them. I’m very hype for more Kerri. Punch me in the face, queen!

June Jambalaya
It’s probably not a great sign that we learn more about June Jambalaya’s personality from Kornbread than we do from June herself. Kornbread and June go way back, so I trust her when she says that June is a “label whore.” But don’t take her for it: the evidence is all there. June enters wearing an Emilio Pucci jumpsuit, and if her Instagram is any indicator, she owns more Christopher John Rogers dresses than Christopher John Rogers himself. Unfortunately, also according to Kornbread, June’s taste level doesn’t seem to be on par with the budget. Lucky for us, though, June has talent in spades. For the talent show, June performs a West African dance. It’s well-choreographed and well-executed, but as Michelle is quick to point out, it suffers in the details. June’s head wrap won’t stop slipping, her control top panties are visible, and it distracts us from enjoying the full performance. The details make the drag, and June’s lack of attention to them lands her squarely in the first bottom two of the season.

Orion Story
Last and quite possibly least, Orion Story. Orion enters the werkroom reciting a novel-length entrance monologue that ends with “RuPaul, we’ve been trying to reach you regarding your car’s extended warranty.” It’s giving … terminally online. The joke doesn’t seem to land with the queens either, so Orion’s entrance is greeted by crickets. To Orion’s credit, she’s quite the seamstress. She tells the queens that she made everything she’s wearing, and the stonework is very impressive to my untrained eye. As a general rule, I try not to discuss drag queens’ work solely in the context of other drag queens (e.g. this queen is a combo of Willam and Violet, etc.) But when it comes to Orion’s talent show performance, it’s hard not to see the parallels. It’s almost a beat-for-beat rehash of Crystal Methyd’s one-woman show from two seasons prior, and the bowl-cut wig/hanging cigarette combo is unmistakably Katya. And by all means, steal from and copy the best: I certainly do! But there’s not nearly enough individuality in Orion’s performance, and it never escapes the specters of the legendary queens she’s mimicking. The judges unanimously agree that Orion’s comedy show wasn’t all that comedic, and she’s sent to fight for her life against June Jambalaya.

And fight for her life she does, but to little avail. The queens show up and show out to “Water Me” on Lizzo. It’s a solid lip-sync, and while Orion does well with it, June’s victory is decisive. And Just Like That … we have our first elimination. Next week we meet our final seven queens and, of course, Jennifer Lopez! Let’s get loud!!

A new weekly segment where I briefly discuss stray thoughts that won’t leave my head.

Guest Judge Lizzo
Lizzo has all the hallmarks of a perfect guest judge, by which I mean she’s strongly represented on my Spotify Wrapped. But in all seriousness, she’s funny, knowledgeable, and seemed truly happy to be there. 10/10! Maybe I’ll give “Rumors” another shot.

Bosco: “You’re giving me a little bit of Lana Del Rey vibes.”
Orion: “I get that a lot”
I bet you do…

Powered by CashApp
POWERED BY CASHAPP!!!