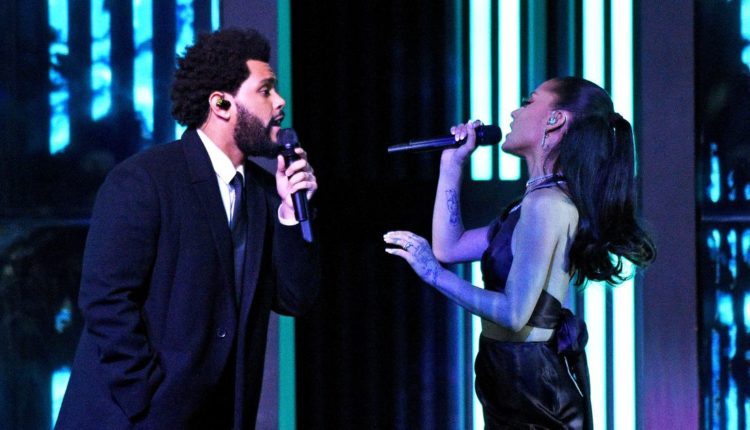 As the Weeknd’s new album, Dawn FM … dawns, so have the fan theories. Abel Tesfaye has never shied from drawing on his personal life in his music — remember My Dear Melancholy and all its Selena Gomez references? Still, one particular song on Dawn FM surprised fans with its lyrics: “I Heard You’re Married.” Sound like a shot at the Weeknd’s “Save Your Tears” and “off the table” collaborator Ariana Grande? The same Ariana Grande whom fans often theorize dated the Weeknd and who indeed got married last year as the Weeknd prepped the follow-up to his 2020 smash, After Hours. So did the Weeknd and Ari hook up — and did he save his tears about the split for his new album? And on top of it all, how does Angelina Jolie fit into this mess?! Let’s break it down.

Nothing good, that’s for sure! The Weeknd saves some of his biggest punches for one of the final songs on Dawn FM, on which he sings about being in “a fling” with a woman who’s already taken. “It hurts to think I’m sharin’ you,” he sings in the first verse. Later, he goes on to state things more plainly: “Why you even with him if you’re cheatin’?” he asks his partner. As the song goes on, he has decided to leave the affair, telling the girl in question, “I can’t be with you / You’re too deceiving, girl.” Sorry to this woman!

The Weeknd doesn’t make the subject of “I Heard You’re Married” too explicit, but it’s definitely possible to read between the lines. First, we know the Weeknd’s two highest-profile exes (not to mention some of his favorite lyrical topics), Bella Hadid and Selena Gomez, are not married. That opens the door to some speculation as to other women the Weeknd could have been involved with … including Grande. After collaborating on the sensual 2014 duet “Love Me Harder,” the two reconnected in 2020 for “off the table,” another duet for Grande’s album positions, widely seen as a proclamation of love to her then-new boo, Dalton Gomez. About half a year later, in April 2021, Grande hopped onto a remix of the Weeknd’s After Hours single “Save Your Tears.” By that point, she was engaged to Gomez, just weeks away from her eventual intimate wedding and, theoretically, could have been intimate with the Weeknd, too. (And how’d he hear she was married? Well, he liked the Insta post, for starts.) The two went on to perform “Save Your Tears” at the iHeartRadio Music Awards in late May and released a Vevo live performance of “off the table” in July, both reportedly after Grande’s wedding.

Not buying it? Let’s look at the text. The sleuths at Genius say the early line “You manifested this, but girl, I blame myself” could be a reference to Grande’s positions song “just like magic,” which also touches on manifesting (in her case, “good karma”). Some stans also say that “too good to be true” line in the chorus could be pulling from a favorite saying of Ari’s, which appears on songs like “positions” (“You’re just too good to be true”) and “someone like u” (“Baby this time, please don’t be too good to be true”), both also off positions. Perhaps the most convincing piece of evidence, though, or at least the most head-turning coincidence: The Weeknd’s song features Lil Wayne, who previously worked with Grande on “Let Me Love You,” an ode to single loving off her 2016 album, Dangerous Woman. Could that song have been about the Weeknd? The jury remains out.

Here’s where things get fuzzier. Some fans have latched on to other Dawn FM lyrics as references to Grande, but not all of those check out. On the album’s first proper song, “Gasoline,” for instance, the Weeknd sings, “I’m dozing off to R.E.M. / I’m trying not to lose my faith.” And sure, Grande has a song and a beauty line called “r.e.m.” But the next line is the important part — that’s a reference to “Losing My Religion,” by the widely influential rock band R.E.M., which shares the darker sonic palette the Weeknd uses on Dawn FM. Sometimes it’s just not that deep.

Elsewhere, on the song “Here We Go … Again,” the Weeknd addresses an ex who’s with a new, less famous man. “Your girlfriend’s tryna pair you with somebody more famous / But instead you ended up with someone so basic, faceless,” he sings. Now, this could also be the Weeknd’s confirmed ex Bella Hadid, who’s currently dating a dude not many people know by face or name, art director Marc Kalman. But let’s go back a few lines before, where the Weeknd is singing about living large after his Super Bowl performance. “Said you wanted your boyfriend jealous with a couple pics,” he seriously sings. “And you didn’t expect to fall for me once you got this dick.” At the time, Grande would have been engaged to Gomez — a noncelebrity real-estate agent — and working on the “Save Your Tears” remix with the Weeknd. Could that have been part of a stunt Grande pulled on Gomez that escalated? If so, the Weeknd goes on to sing on “Here We Go … Again” that he doesn’t care. “My new girl, she a movie star,” he sings in the same verse, throwing in a seeming confirmation of his rumored relationship with Angelina Jolie. The real buried lede here!

Oh, and one more note on movie stars: The Weeknd’s album, formatted as a radio broadcast, is narrated by none other than Jim Carrey as a DJ. If the Weeknd is singing about a split from Grande, that detail could be salt in the wound considering her own well-documented friendship with the comedian.

Nothing yet. The pop star didn’t congratulate her (former?) friend on the release of his new album on Instagram. But contrary to some reports, she also didn’t unfollow him on Instagram. Remember, she’s no longer gracing us with her Twitter presence. Mrs. Grande seems to be content living her quiet, married life at the moment.