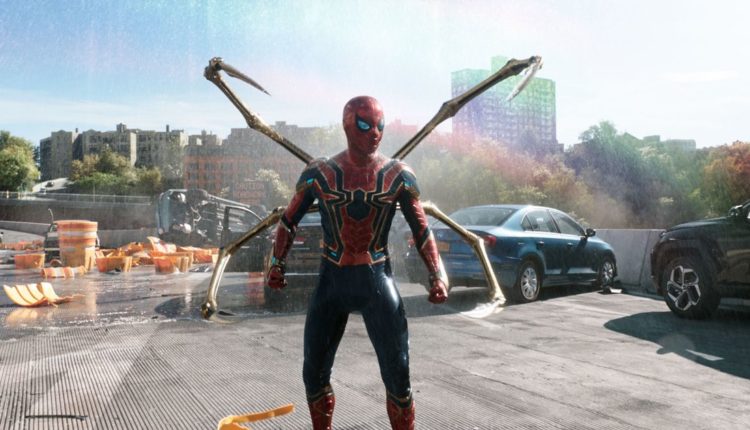 Over its opening weekend in theaters, Spider-Man: No Way Home cast its web around the public imagination, selling a record number of tickets for a box-office haul considered gargantuan even by the standards of the pre-N95 era. The third in a trilogy fronted by Tom Holland and directed by Jon Watts, No Way Home arrived like a global cultural event, obliterating all financial projections after hitting 4,336 theaters in North America Thursday night. It took in $253 million domestically — more than $100 million more than prerelease “tracking” estimates had predicted — and roared to $587.2 million worldwide to log the third biggest opening of all time, trailing only the debuts of all-time heavyweights Avengers: Infinity War and Avengers: Endgame. The most massive box-office tally of the pandemic era and the most successful launch of any Sony-distributed movie to date, that achievement is all the more remarkable coming at a time of rapid Omicron-variant proliferation, when filmgoers are showing continuing reluctance to return to the communal experience of sharing oxygen in an auditorium and as predictions of doom for the theatrical moviegoing experience have never been more widespread.

“I would say this may be the most important box-office weekend ever,” says Comscore senior media analyst Paul Dergarabedian. “This is a real turning point. The road to recovery has been very difficult for movie theaters. So given what this industry has been through since March 2020, I would argue this is the most important weekend in box-office history because it represents movie theaters rising like a phoenix from an incredibly challenging and tough time where many counted out the movie theater for good.”

“It’s hard to argue with the power of the movie theater to draw audiences when you’re looking at these kind of grosses,” Dergarabedian added. “And I don’t think this is a flash in the pan. It just shows if you have the movies, people will come out.”

With Spider-Man: No Way Home jumping the line to rank as 2021’s most commercially successful movie, the crowd-pleasing thriller (which boasts an A+ CinemaScore among moviegoers between 18 and 24) stands as the fourth Marvel Cinematic Universe entry in this year’s Top 10. It joins Shang-Chi and the Legend of the Ten Rings (No. 2, $224.5 million), Black Widow (No. 4, $183.6 million theatrically), and Eternals (No. 6, $163.5 million) on the year-end highest-grossing blockbusters list. “This is the biggest event movie to come out in two years,” says Shawn Robbins, chief analyst for Boxoffice Pro. “Even though we’ve had three Marvel movies come out this year, they were either about unestablished characters or, in Black Widow’s case, a character whose fate you knew.” No Way Home, on the other hand, “is the continuation of a big story line. And it’s promising this big crossover with past Spider-Men, the likes of which hasn’t really happened before.”

No Way Home distributor Sony spent an eye-watering $202 million to globally market the movie. And those efforts included a deep push into social media and the gaming community with TikTok hosting a livestream of the film’s premiere, Fortnite featuring Spider-Man “skins” and upgrades available for purchase, and PUBG Mobile, one of the world’s top mobile games, creating a “fully immersive Spider-Man integration” with in-game props and avatars.

But according to Robbins and Dergarabedian, fan anticipation — and more specifically, the twin-pronged effects of FOMO coupled with fanboys’ determination to avoid online spoilers — were largely responsible for turning the film into a box-office juggernaut. Earlier this year, when Spider-Man: No Way Home was revealed to take place in a “multiverse” in which conflicting timelines and even multiple Spider-Men could coexist, fans lit up social media and Reddit with speculation about which yesteryear supervillains and past iterations of Spidey might be made manifest. “So this becomes a cultural event and a social event by virtue of social media, where people are virtually covering their ears and going, No, no, no, I can’t hear you,” Dergarabedian says. “But if you wait too long, spoilers are inevitably going to leak out. So if you don’t want this movie ruined for you, you shut off the world and run to the multiplex.”

Your friendly neighborhood Spider-Man has long reigned as one of fandom’s biggest draws. In 2002, director Sam Raimi’s opening entry of the first blockbuster trilogy, Spider-Man, became the first film to sell more than $100 million worth of tickets in a single weekend (and in the process effectively rebooted Hollywood’s expectations for tentpole and “event” movies plotted around superhero IP). But despite the character’s canonical connection to Marvel Comics, Spidey — as played by Tobey Maguire in a successful trio of aughts films and Andrew Garfield in a pair of less commercially and critically beloved ones in the 2010s — remained the exclusive property of Sony, while other Marvel heroes appear in films distributed by Marvel Studios’ corporate parent, Disney. That all changed in a landmark custody-sharing deal in 2014 between the competing studios; Holland first turned up on the end of a web in 2016’s Captain America: Civil War. He’s now thwipped his way through six Marvel Cinematic Universe–branded movies including the Disney-distributed Avengers: Endgame and the 2019 Sony hit Spider-Man: Far From Home.

The irony of heralding Spider-Man: No Way Home’s box-office breakthrough as a positive augury for the future of theatrical moviegoing is that the thriller arrives on a weekend that saw Best Director and Best Picture Oscar winner Guillermo del Toro’s adult-skewing neo-noir drama Nightmare Alley conjure up decidedly lackluster ticket sales. Rolling out in 2,145 theaters across North America, it grossed a mere $3 million over the past three days to rank fifth in new movies in wide release — seemingly driving another nail into the coffin of grown-up storytelling at the multiplex. “The numbers were a bit more modest than we’d predicted,” Frank Rodriguez, the SVP general sales manager of Nightmare Alley’s distributor, Searchlight Pictures, told Deadline. “The hope is that after people have seen Spider-Man, they may choose to see a film like Nightmare Alley.”

In total, the MCU has made more than $24 billion over the course of 27 films since 2008 — a staggering run of success that attests to Marvel’s diamond brand equity, still unrivaled by any of Hollywood’s challenger cinematic universes after more than a decade. And even though No Way Home is distributed by Sony, a top Marvel-Disney brain trust (including Marvel Studios president Kevin Feige, co-president Louis D’Esposito, and Victoria Alonso, Marvel’s president of visual effects, animation, physical and postproduction) were deeply involved in its creation and marketing. To hear it from Robbins and Dergarabedian, the MCU’s intrinsic innovation of characters and arcs that jump between films, creating unexpected and surprising connective tissues, has programmed viewers to override any pandemic recalcitrance and turn out for the films again and again. As with Spider-Man: No Way Home, they show up so as not to be left out of the conversation, whether virtually or otherwise.

“It’s been a top-down commitment to make these movies as great as they can while intertwining very complicated character arcs and multiverses,” Dergarabedian says. “Savvy audiences have figured all this out and enjoy being part of it. The brilliance of putting Easter eggs at the end: It just makes it that once you’re ‘subscribed’ to the MCU, you’re never going to unsubscribe.”

For Robbins, the MCU’s cause and effect is even simpler: “Just great storytelling that people can identify with,” he says. “They’ll laugh; they’ll cry. Every emotion is covered in between. And they’ve built on that.”

You’ll need a vaccine to go inside Boston restaurants, entertainment venues and gyms