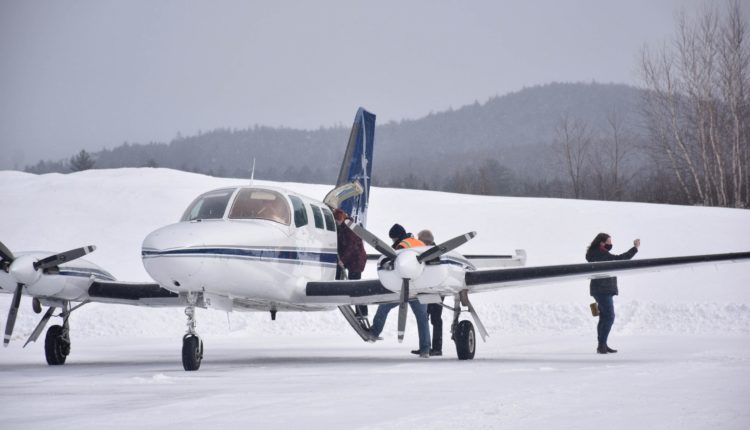 LAKE CLEAR — The engine of a Cessna 402 airplane roared as the airplane lifted off the tarmac at the Adirondack Regional Airport on Wednesday.

This was the second flight from Adirondack Regional Airport (SLK), to JFK — the first was on Tuesday. There were three passengers and two pilots on the Wednesday flight.

Cape Air Marketing Director Erin Hatzell said there’s been an average of 50% capacity on flights to JFK so far, a mix of passengers — people flying for business, college students moving between school and home and sightseers.

Hatzell said with COVID-19 restrictions lifting, people may catch the “travel bug” and want to fly around.

Cape Air began offering flights to JFK on Tuesday, a result of SLK’s updated contract with Cape Air in January, which included converting one of the company’s three daily flights to Boston-Logan International Airport into a nonstop, roundtrip flight to JFK. JFK connects to 184 direct destinations in 79 different countries.

The new route was added by Cape Air, in part, to secure the continuation of its contract at SLK, where it’s been since 2008. The New York City route has been requested by the community for years.

The Harrietstown-owned Adirondack Regional Airport is part of the federal Department of Transportation’s Essential Air Service program, which facilitates and funds the $3,529,342 annual contract. With a predicted $895,605 in passenger revenue from the airport each year, the rest of the operational cost is paid for through an annual $2.6 to $2.8 million federal subsidy from the federal DOT.

Hurwitch said the new route has been uneventful for airport staff — their main concern is keeping the runways clear of snow and ice — but passengers have been excited.

He said all sorts of people fly Cape Air through the Adirondack Regional Airport — business travelers, tourists, college students leaving and returning home, J-1 employees heading to and from their home countries and people seeking medical services at larger hospitals, namely in Boston.

Cape Air also plans to start flying the Tecnam P2012 Traveller in and out of SLK. Hatzell said the Cessna 402 airplane has been the staple of its operations for decades, but it’s been working with the Italian aeronautics company Tecnam to develop its next generation of aircraft.

Hurwitch said the new plane is roomier and more comfortable than the current plane. The new plane seats nine passengers, like the Cessna 402, but also includes up-to-date instrumentation for the pilots, USB ports, leather seats and LED lighting.

The Tecnams, being new $1 million planes, need to be housed in hangers. Hurwitch said the airport didn’t have any open, so they’re leasing space from a private hanger owner.


Today’s breaking news and more in your inbox