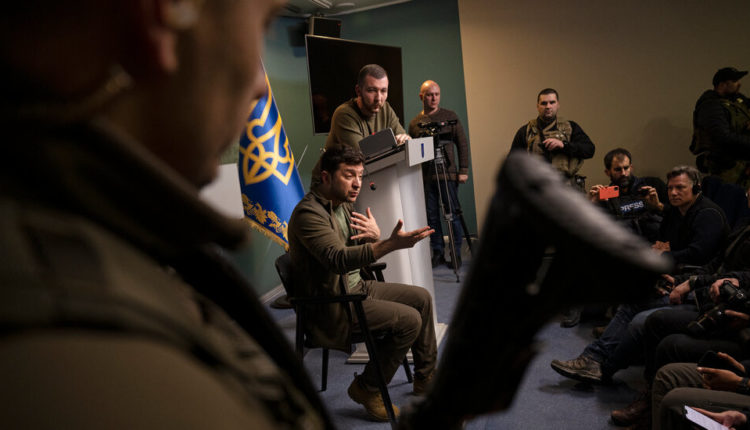 KYIV, Ukraine — Unshaven and wearing a military T-shirt, a haggard President Volodymyr Zelensky of Ukraine on Thursday hosted his first news conference since the war began, inviting journalists into his office building, now fortified with sandbags.

In an animated briefing, Mr. Zelensky, whose defiance has made him a symbol of Ukrainian resistance to the Russian invasion, laid out the state of negotiations with Russia, voiced pride in his people, pleaded for a no-fly zone and spoke frankly about fear of dying.

Beyond the answers Mr. Zelensky provided to questions, pulling a chair close to attending journalists, the news conference seemed intended to signal that his battered government is at least still functioning a week into the war, despite increasingly dire conditions in Kyiv.

Mr. Zelensky said he was particularly proud of ordinary Ukrainians’ resistance to the Russian attack, a seething, angry uprising by much of society even as Russian tanks bore down on major cities and the capital.

“That is why I am so strong and so decisive,” he said. “We have a special people, an extraordinary people.” He said that no senior officials had fled the country, and several top aides turned up at the news conference.

Mr. Zelensky said he had appealed to Western leaders for additional military support, including asking President Emmanuel Macron of France and Chancellor Olaf Scholz of Germany to impose a no-fly zone over Ukraine, an unlikely proposition, while also pursuing negotiations with the Russian leadership. The second of two rounds of talks with Russia in recent days took place on Thursday.

“We are ready to speak on all topics,” he said. Mr. Zelensky’s negotiator at the talks, Mykhailo Podolyak, said later Thursday negotiations wrapped up with an agreement on cease-fire corridors for civilians to escape heavy combat, but no progress on a settlement.

“The Russian side has long ago formed the answers to their questions,” Mr. Zelensky said. “What is the point of posing questions if you long ago have the answers? For now, this is the difficulty of this dialogue.”

He said he was ready to compromise on some points, but he did not specify which, and said he would not bend on conditions threatening Ukrainian sovereignty.

Reporters arrived at the presidential office in minivans that wove through concrete barriers and steel I-beams welded into crosses and placed on the streets to slow tanks. In the government district of Kyiv, usually a quiet, leafy neighborhood of offices and elegant, 19th century apartment blocks, armored cars blocked crossroads.

The vans sped through a warren of courtyards and into a back entrance to the presidential office building. Inside the building, security officials escorted journalists by flashlight through darkened corridors filled with soldiers.

Sandbags had been stacked along the windowsills. At doorways, firing positions were in place to shoot from inside Mr. Zelensky’s office compound onto the street outside, suggesting a readiness to hold out even if street fighting reaches the site.

Mr. Zelensky thanked the reporters for turning up.

“It’s best to see it with your own eyes,” he said of the city’s preparations for defense. Still, he said, he was doing all he could to negotiate.

Mr. Zelensky said he was getting about three hours of sleep a night. His cheeks sagged with weariness. He was, though, animated and gestured energetically to drive home points.

Though the briefing was held in a conference room to suggest some modicum of normality, soldiers with assault rifles stood in the room and the windows were blocked by piles of white sandbags.

He reiterated his request for direct talks with President Vladimir V. Putin, something the Russian leader has rebuffed both before and after the start of hostilities.

Of the conflict and what he described as reports the Russian army did not intend to repatriate its war dead to avoid stirring antiwar sentiment at home, he said, “this is a nightmare. I cannot even imagine the type of man who would plan such acts.”

A Ukrainian city falls. Russian troops gained control of Kherson, the first city to be overcome during the war. The overtaking of Kherson is significant as it allows the Russians to control more of Ukraine’s southern coastline and to push west toward the city of Odessa.

Many of the Russian soldiers were 18- and 19-year-olds, said Mr. Zelensky, who is 45. He noted that the soldiers are about the age of his own daughter and “could be my children.” He added: “They will die in uniforms because of decisions made by men in suits.”

Mr. Zelensky said he had asked Mr. Scholz and Mr. Macron to impose a no-fly zone over Ukraine. The idea has been largely rebuffed by Western governments as all but impossible, for risking direct conflict between NATO and Russian forces.

But he said that Russian aggression would only spread if not stopped in Ukraine. The leadership in Moscow, he said, would at some point push on to other Eastern European countries and eventually build a new “Berlin Wall.”

He criticized German officials for working at cross-purposes with Western efforts to pressure Russia into a settlement in the long-simmering eastern Ukraine war by building a new natural gas pipeline, Nord Stream 2, to Russia. The pipeline was intended to provide cheap energy for Germany’s economy, though the project is now suspended.

Mr. Zelensky, a former comedian who has always had a keen sense of image and storytelling in politics, said he was aware that his repeated televised appeals for resistance, and continued presence in the beleaguered capital, had turned him into a symbol in many countries of bravery and defense of democracy. That was helping Ukraine, he said.

“I’m very happy the world united” to support Ukraine, said Mr. Zelensky, who has refused to the flee the country, turning down a reported American evacuation offer. “I need ammunition, not a ride,” he said at the time.

Mr. Zelensky did have caustic words for Prime Minister Naftali Bennett of Israel, who has balanced support for Ukraine with an effort to maintain ties with Russia and had blocked some transfers of weapons to Ukraine that include Israeli-manufactured parts. Mr. Zelensky, who is Jewish, noted that a Russian missile this week killed five civilians on the territory of a Holocaust memorial site in Kyiv, Babyn Yar. The missile had targeted a television broadcasting tower.

Mr. Zelensky said he was inspired to see images of people praying at the Western Wall in Jerusalem wrapped in blue and yellow Ukrainian flags. He suggested it was time for the Israeli government to take a moral stand. “Everything is tested by this moment,” he said. “I don’t feel that he is wrapped in the flag of Ukraine,” he said of Mr. Bennett.

Asked if he was afraid of dying in the war, he said everybody has such fears.

“I’m an alive person, like any human being,” he said. “And if a person is not afraid of losing his life, or the lives of his children, there is something unwell about that person.” He added, though, that as president, “I simply do not have the right” to be afraid.

If he were not president, he said, he probably would have joined the volunteers who accepted rifles when the military started handing them out last week, and so would be facing risks in any case. He said he might also have chosen to help by handing out food to soldiers instead. He quipped that, “I am probably not as good a shot as some other people.”