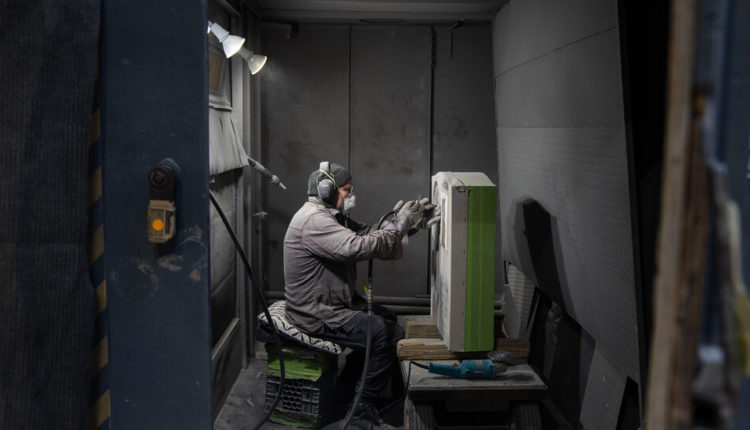 Good morning. How far do supply chain issues reach? Today we’ll look at an unlikely niche of the New York economy that is coping with them. We’ll also hear from a big band that’s swinging again.

The words “supply chain issues” have appeared 178 times in The New York Times in the last year. Many of those mentions had to do with high-tech products. But the most recent showed that those issues have crimped old-fashioned businesses with time-honored manufacturing methods. The headstone makers.

Monument memorial companies’ problems compounded the grief of people who have lost loved ones to the coronavirus and delayed the sense of closure that comes with seeing a grave marker in place. Nearly 40,000 people have died of Covid-19 in New York City since the first case was reported two years ago.

Our writer Liza Weisstuch says that demand quickly strained the memorial industry. Monument companies were not classified as essential businesses when New York State ordered a shutdown in March 2020. Their status changed after the New York State Monument Builders Association appealed to state officials, but the backlog was already piling up at Domenick DeNigris Monuments and Mausoleums in the Bronx, one of a few such companies in a city that was once a nexus for monument making.

“We probably have over 800 orders; it’s so depressing,” said Don DeNigris, a third-generation co-owner.

Then came the supply chain problems. The 3M Company announced last fall that it would stop making spools of a rubber-based adhesive stencil that can withstand the force of sandblasting, something that monument companies depend on. 3M attributed the decision to “severely constrained raw material availability, exponentially increasing costs and strategic business focus,” according to a letter to its clients.

For the city’s monument companies, this was not good news. DeNigris and Sprung Monuments — which opened in Williamsburg, Brooklyn, in 1905 and moved to Long Island in the 1950s — began hunting for other sources of stencils, hoping their inventories would last until alternatives arrived.

“It’s like your last drink,” said Adam Sprung, a fourth-generation owner of Sprung Monuments. “You kind of nurse it.”

Smaller stencil makers could not sell them as many spools as they needed. Some companies imported stencil products from China, only to face unexpected shipping costs, tariffs and transportation delays.

DeNigris said all of this is hard to explain to customers who are — understandably — raw with grief.

“Our hands are tied, that’s where we are,” he said. “It has to be explained the right way. And this is not a New York City problem, it’s not a state problem. It’s a world problem.”

High pressure will bring dry weather and sunshine on a colder-than-average day with temps steady in the 30s. Tonight will be partly cloudy.

The coronavirus pandemic silenced Vince Giordano and the Nighthawks, a band that plays the kind of music that caught on when the Jazz Age dawned after the Spanish flu outbreak a century ago.

“A lot of my guys couldn’t pay their New York rent, so they had to split town,” Giordano told my colleague Corey Kilgannon. Worse, Giordano recalled, “You had a lot of people saying New York was dead, that it wasn’t going to come back again.”

Giordano — who plays a variety of instruments, including the tuba, the bass saxophone and the string bass, which he slaps, as jazz bassists did — kept practicing during the pandemic. So did the others in his band. But not together. And that worried Giordano.

“When a band is apart,” he said, “it takes a little time to get the old engine to turn over again.”

The engine is revving again, with its familiar visual touches. Besides Giordano’s distinctive aluminum bass, there is the violinist Andy Stein’s strange-looking “phono-fiddle.” It has a gramophone-style horn attached to amplify the sound.

There are some new Nighthawks. A few players decided not to return to New York as infections waned after the Omicron surge, forcing Giordano to hire replacements. Among them is the drummer Paul Wells, who stepped behind the band’s distinctive antique set with its hand-painted bass drum and wooden Chinese blocks. Giordano and the Nighthawks now play on Mondays and Tuesdays at Bond 45, on West 46th Street (but not this coming Monday, March 7).

And Giordano said some social media influencers have also dropped by.

“They put some videos online with descriptions like ‘Gatsby’ and ‘Prohibition’ and ‘speakeasy,’” he said. “Having a 1920s band on TikTok just blew me away, but hey, whatever it takes.”

How the Supply Chain Crisis Unfolded

The pandemic sparked the problem. The highly intricate and interconnected global supply chain is in upheaval. Much of the crisis can be traced to the outbreak of Covid-19, which triggered an economic slowdown, mass layoffs and a halt to production. Here’s what happened next:

A reduction in shipping. With fewer goods being made and fewer people with paychecks to spend at the start of the pandemic, manufacturers and shipping companies assumed that demand would drop sharply. But that proved to be a mistake, as demand for some items would surge.

Demand for protective gear spiked. In early 2020, the entire planet suddenly needed surgical masks and gowns. Most of these goods were made in China. As Chinese factories ramped up production, cargo vessels began delivering gear around the globe.

Then, a shipping container shortage. Shipping containers piled up in many parts of the world after they were emptied. The result was a shortage of containers in the one country that needed them the most: China, where factories would begin pumping out goods in record volumes

On a Monday morning after a snowstorm, I shoveled a path from the sidewalk to the street in front of my Brooklyn home.

The path was long, and there had not been a good way across the snow to the street before I made it.

I was expecting a delivery: an ornately carved, 1865 marble fireplace from a townhouse in the East 50s that was to be demolished. The fireplace was exquisite, and I thought I would enjoy looking at it in my plain front room.

As I waited, I watched other people use my path to the street. It became so popular I got nervous that it would be blocked when the movers arrived.

When they did, the path was clear. There were two of them, and they unloaded the fireplace carefully in four sections and navigated the path just fine.

Following them inside, I suddenly heard myself scream: The largest and last piece of the fireplace had shattered, seeming almost to implode.

The men staggered around in a giant cloud of dust. They said they were sorry, that it wasn’t their fault — which, of course, was true.

Soon, they left, and I stood with my expensive pile of rubble. I looked at the empty wall where the beautiful old piece would have gone. I removed the big pieces of broken marble. Then the little pieces and the chunks of plaster.

Finally, I swept the dust into a paper bag. Later, I knew, I would have to mop.

All afternoon, I sat at the front window and watched my path. A woman crossed with a tiny dog. The passenger door of a taxi glided to a stop, exactly level with the opening I had created.

A man carrying a plastic bag filled with empty cans walked through sideways. And a courier towing a cart of packages left tracks that made my path ever so slightly wider.

Glad we could get together here. See you Monday. — J.B.

P.S. Here’s today’s Mini Crossword and Spelling Bee. You can find all our puzzles here.

Sign up here to get this newsletter in your inbox.

Catch up on the latest news on Ukraine.